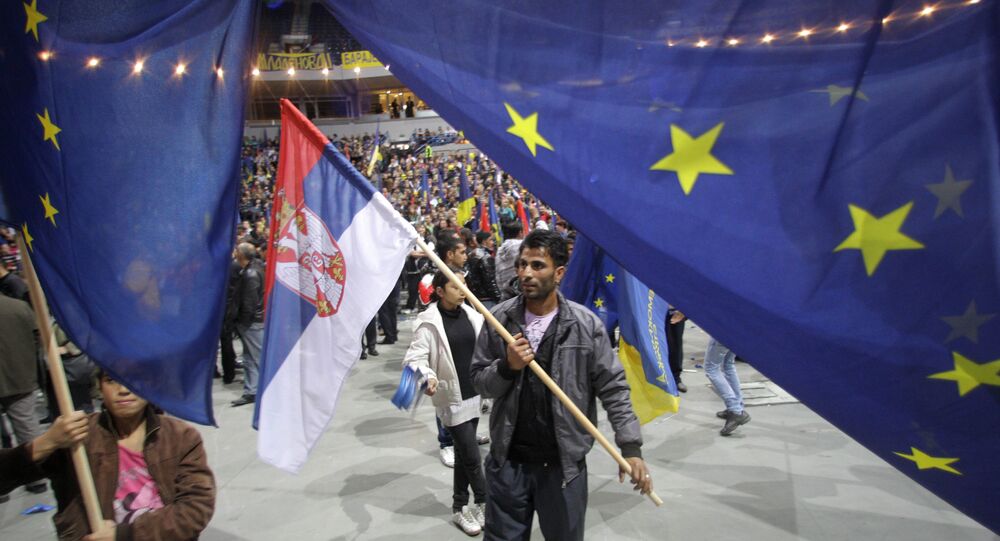 VIENNA (Sputnik) - Austria will continue to further promote the negotiations on Serbia's accession to the European Union, Austrian Chancellor Sebastian Kurz said following the meeting with Serbian President Aleksandar Vucic ahead of the EU-Western Balkans summit in the Bulgarian capital of Sofia.

Kurz stressed that Austria and Serbia had close ties in the political, economic and cultural fields.

"At the meeting with [Serbian] President Aleksandar Vucic in Sofia, we have shared our expectations for tomorrow's summit with the Western Balkan countries and Austria's [upcoming] Presidency of the Council of the European Union. We intend to further promote negotiations with Serbia on its [EU] accession," Kurz wrote in a tweet.

​The Austrian chancellor stressed that Serbia was the basis for the stability in the Western Balkans and noted Serbia's progress in the accession talks.

Earlier this month, President of the European Parliament Antonio Tajani said that Serbia, as well as Montenegro, may complete their accession to the European Union by 2025.

© AP Photo / Darko Vojinovic
Serbia, European Union Open 2 New Bloc Accession Chapters
At the same time, the European Commission released in February 2017 its strategy for the Western Balkan countries called "A credible enlargement perspective for an enhanced EU engagement with the Western Balkans," setting a number of goals that should be achieved by the candidate countries in order to complete the accession process.
In 2003, Brussels identified Serbia as a potential candidate for accession to the European Union. In 2009, Serbia formally applied for the EU membership, after which it was officially granted EU candidate status in 2012. The accession negotiations between Serbia and the European Union formally started in January 2014.
...
Reddit
Google+
Blogger
Pinterest
StumbleUpon
Telegram
WhatsApp
14