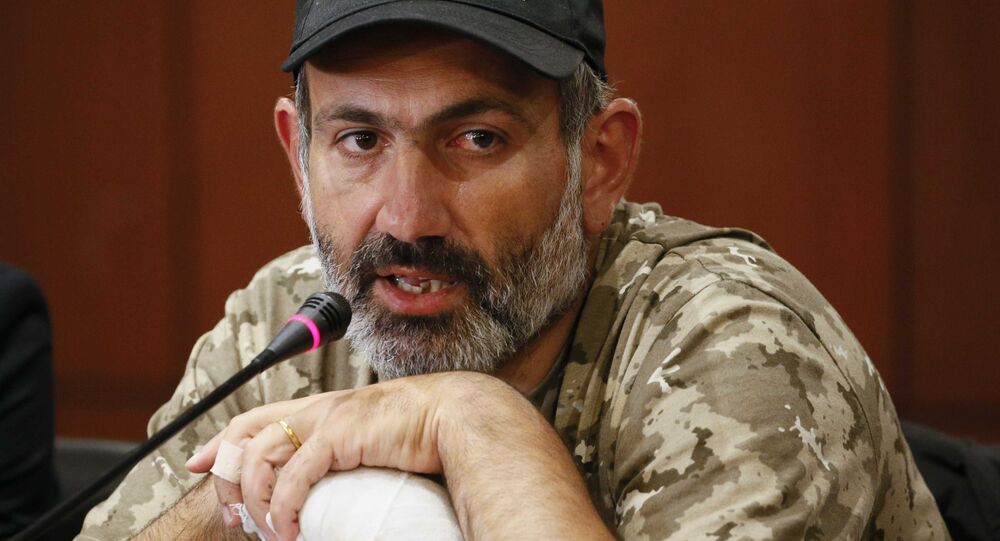 YEREVAN (Sputnik) - The ruling Republican Party of Armenia (RPA) is ready to go into opposition should Armenian protest leader Nikol Pashinyan, nominated for the post of prime minister, be elected, Vahram Baghdasaryan, the head of the RPA parliamentary faction, said Monday.

"One, who enters [the area of] politics and decides to stay in power forever, does it out of interest. There is no guarantee where a political force will find itself – in power or in opposition. Naturally, we are ready to be in opposition," Baghdasaryan told reporters.

He went on saying that the RPA did not intend to create obstacles to efforts that pursued the country’s interests.

"Unlike our opponents, we are ready to see positive [sides] and criticize negative ones, calling for a dialogue to settle problems," Baghdasaryan said.

The official also noted that the RPA remained concerned about possible shifts in the foreign policy course and national security issues.

Deputy Speaker of Parliament and member of the Republican Party's executive body Eduard Sharmazanov said later in the day that the RPA will ensure the election of opposition leader Pashinyan as the country's prime minister.

"We will help with the necessary votes to elect a candidate nominated by the third of the parliament, in this case — Pashinyan. By the decision of the party and its faction, our deputies will vote for him," Sharmazanov noted.

Under Armenian law, the parliament has to elect a prime minister a week after the first attempt of the vote, otherwise, the legislature will automatically be dissolved.

Host photo agency
Kremlin Hopes Alliance With Armenia Remains Principle for Both Countries
On May 1, the Armenian parliament failed to elect a new prime minister, with the only candidate, Pashinyan, receiving 45 votes out of the required 53, which led to the resuming of protests. Later in the day, the RPA said that it would not nominate its candidate for the premiership and would support the candidate backed by one-third of parliament in the upcoming vote. The country's new prime minister is now set to be elected on Tuesday, with Pashinyan renominated for the post.

The political crisis in Armenia broke out in April after ex-President Serzh Sargsyan was nominated as prime minister. This was largely regarded as a way for Sargsyan, who previously served as president for two terms, to stay in power. Soon afterward, Sargsyan resigned amid large-scale anti-government protests. Armenian First Deputy Prime Minister Karen Karapetyan became an acting prime minister. However, rallies in the country continued as the opposition demanded an interim prime minister who will not be from the ruling RPA.