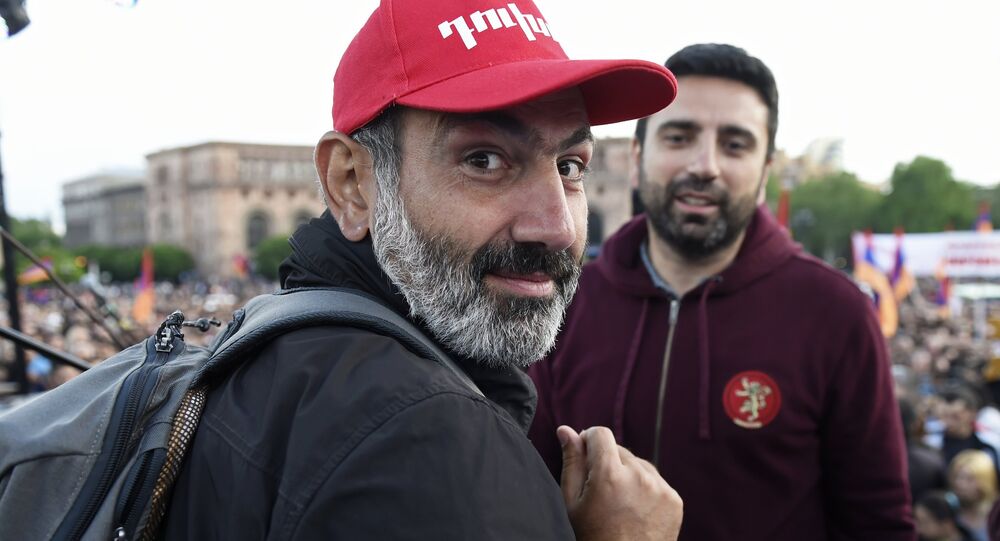 YEREVAN (Sputnik) - The Armenian National Assembly's press service said in a statement on Thursday that opposition figure Nikol Pashinyan, who has been leading protests in the country, has been re-nominated for the post of the country's prime minister.

On Tuesday, the Armenian parliament held a special session devoted to the election of the head of the country's government. Pashinyan, who was the only candidate for the post, was not elected, having received 45 of 53 votes required for assuming prime minister's post. The country's new prime minister is now set to be elected on Sunday, May 8.

© Sputnik / Asatur Esayants
Armenian Protesters Blocking Central Streets, Roadways in Yerevan - Reports
On Wednesday, following Pashinyan's non-election, his supporters took to the streets and started to block roads, the subway, railways and bridges causing almost a total blockade of communication lines in Armenia. Later in the day, the Armenian ruling Republican Party of Armenia (RPA) said that it would not nominate its candidate for prime minister's post and would support the candidate proposed by one third of the parliament's lawmakers in the upcoming vote.

A political crisis in Armenia broke out earlier in April after ex-President Serzh Sargsyan was nominated as prime minister. This was largely regarded as a way for Sargsyan, who previously served as president for two terms, to stay in power. Last Monday, Sargsyan resigned amid large-scale anti-government protests. Armenian First Deputy Prime Minister Karen Karapetyan became acting prime minister. However, rallies in the country continued as the opposition demanded an interim prime minister who will not be from the ruling RPA.