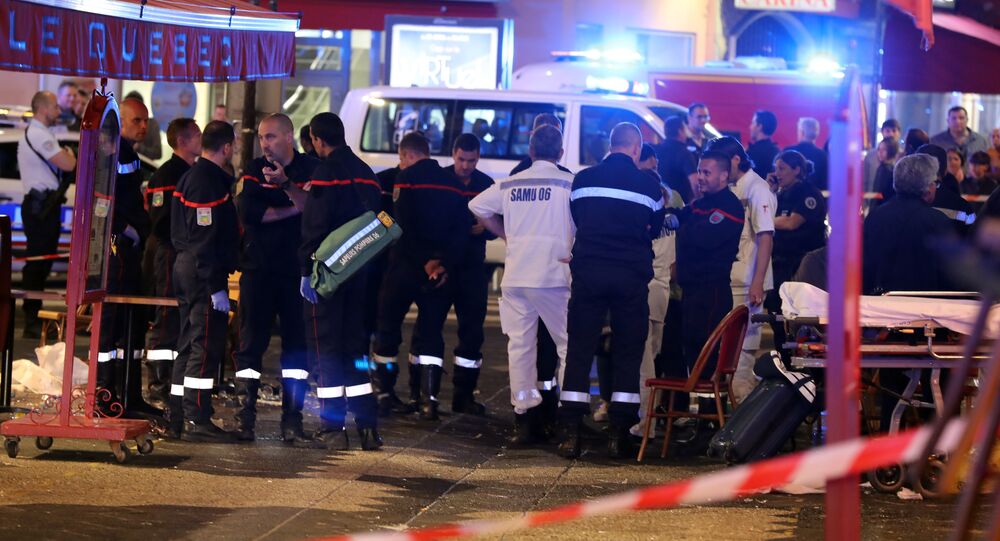 A crowd rushed out of bars in Nice, fearing a terror attack as a person shot a harmless flare gun during a dispute.

A dozen people were injured; some had to turn to hospital treatment as people fled restaurants in panic, fearing a terror attack after they reportedly heard several “detonations.” The turmoil broke out after a person fired a loud but harmless gun in the air at a common argument in a usually crowded street, Masséna, which is known for its cafes and bars. After the alarm was set off, emergency services and police arrived and could arrest the culprit.

Nice. A man shoot only in the air. And then thanks to the panic 12 people get hurt. First I thought that 12 people were shot down. But the shooting was not the problem, but the panic.
Maybe the governments should tell the people what is best to do when you hear shooting or a bomb pic.twitter.com/u3ZisFDazt

​
Mayor Christian Estrosi arrived at the site, and thanked the emergency services for their work.

​With the emergency services, fire brigade and EMS, and police on the pedestrian zone at # Nice06. I want to thank them for their efficiency and for taking care of people, slightly injured in the crowd movement.

Over the past several years, France has survived several brutal terror attacks; responsibility was claimed by the Daesh* terror groups.

One of the most violent struck the resort town of Nice in 2016, and during the national holiday of July 14, a 19-ton cargo truck drove into a crowd of people who were celebrating Bastille Day on the Promenade des Anglais. It took the lives of 86 people and injured 434.

Half a year before that, in November 2015 that gunmen and suicide bombers carried out separate attacks at several sites around Paris: outside an ongoing France-Germany football match at the Stade de France stadium in the suburb of Saint-Denis; and within the Bataclan concert hall and Paris cafes, leaving a total of 130 people dead and some 368 injured.

Despite the current state of emergency in France and tougher security measures, another deadly assault came this March in Southern France. Four people were killed and 16 others were wounded when Radouane Lakdim, a 25-year-old French citizen of Moroccan descent, shot at police officers near the city of Carcassonne and afterwards took hostages in a supermarket in Trebes. Media reported that the jihadist pledged allegiance to Daesh.*