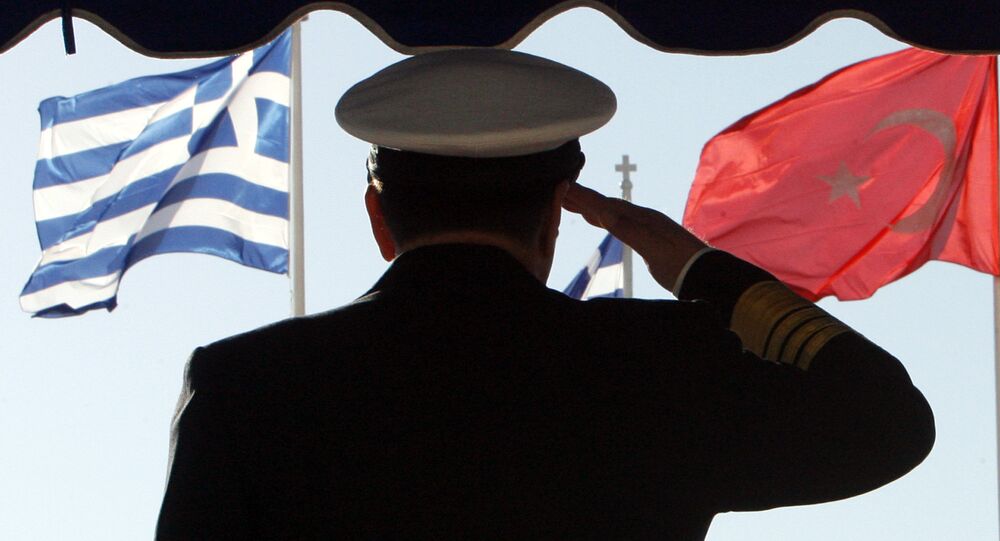 The islands’ affiliation, and even their name, is disputed by Greece and Turkey. The dispute, which began in 1996, is still not completely resolved, despite continuous efforts of the international community and remains one of the stumbling blocks for Turkey's admission to the EU.

The Greek Foreign Ministry discarded Ankara's claims to the disputed Imia (known in Turkey as Kardak) islands and reminded that Athens' sovereignty over them is determined by several international treaties.

"While the EU calls upon Turkey to respect European law, it answers with provocative and lawbreaking statements. It continues to uphold a blatantly unlawful position, ignoring the status of Aegean Sea, determined by the international law," the Greek Foreign Ministry said.

The foreign ministry underscored that Greek sovereignty over the Imia/Kardak islands is clearly stated in several treaties, including most recent one — the Paris Treaty of 1947. The foreign ministry believes that Ankara's statements were prompted by the EU commission's report on Turkey, slamming the lack of progress in fighting corruption and other points requiring its attention in order to join the EU. Athens recommended Ankara to use it as a tool for improving Turkey's image, both public and among the international community.

Earlier, Turkey's Deputy Prime Minister Bekir Bozdag accused Athens of provocative actions in the Aegean Sea and threatened with a response if it persists. Turkey's Foreign Ministry stated that the Kardak islands, its waters and airspace above them remain under exclusive Turkish sovereignty.

The Turkish navy intercepted two Greek ships, with Minister of Defense Panos Kammenos on board, on their way to the disputed islands of Imia/Kardak on January 28. On March 25, Greek Prime Minister Alexis Tsipras warned Turkey against provocative actions in the Aegean Sea and urged them to show a sign of goodwill by returning two Greek soldiers who allegedly crossed Turkey's border by mistake and were apprehended.

The dispute over the two uninhabited islets between Greece and Turkey ignited in 1996 and led to a crisis in the two countries' relations. The conflict came to an end after the intervention by the international community.