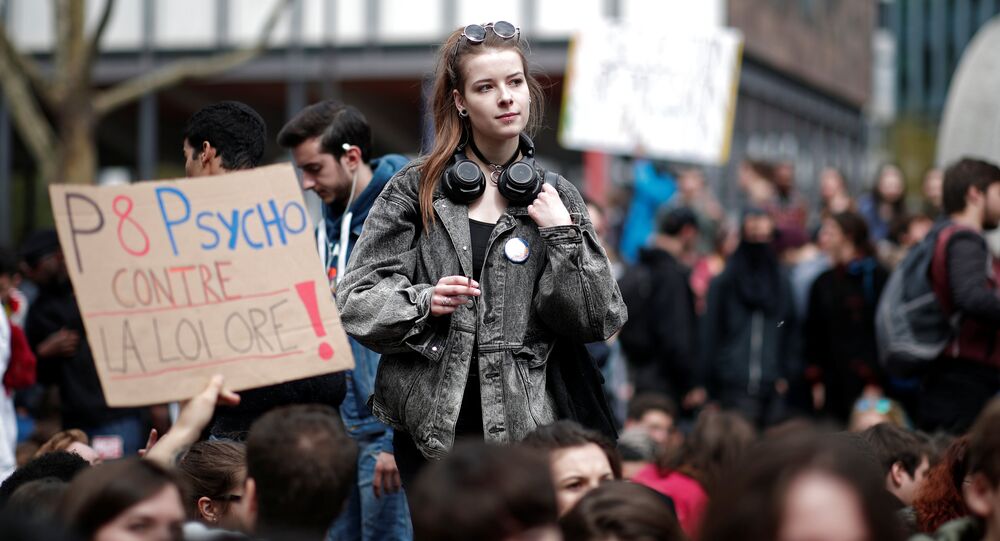 Hundreds of Students Protesting in Paris Against French Education Reform

PARIS (Sputnik) – Hundreds of French schoolchildren and students are holding a mass demonstration against a planned education reform, a Sputnik correspondent reported on Tuesday.

The reform, proposed by the French government, envisions, in particular, abandoning the school-leaving qualification and tightening the criteria for entering a university.

The rally started around 10:45 GMT at the Place de la Sorbonne square in central Paris, which is traditionally used by students to hold demonstrations.

The protesters are holding posters with slogans: "Let Us Save Universities," "No to the Police State," and "We Are Unsatisfied."

Police and security forces are ensuring public order during the demonstration.

Demonstration is starting in Paris!

More than 20 universities have been blocked or occupied this week against the higher education reform!#juststarting #planetudiants pic.twitter.com/DRZWxcgfnN

© AFP 2021 / Pau Barrena
'Let's Get Rid of Spanish (Un) Justice': Protesters Rally in Barcelona During Visit of King Felipe VI (VIDEOS)
Multiple protests have been rocking France since mid-2017, with students, employees and the labor unions of such sectors as education, agriculture, the prison security, retirement homes, railway, aviation, and charities protesting against unpopular measures introduced by the government.

A major student demonstration took place in France in February with thousands protesting against the education reform across the country.