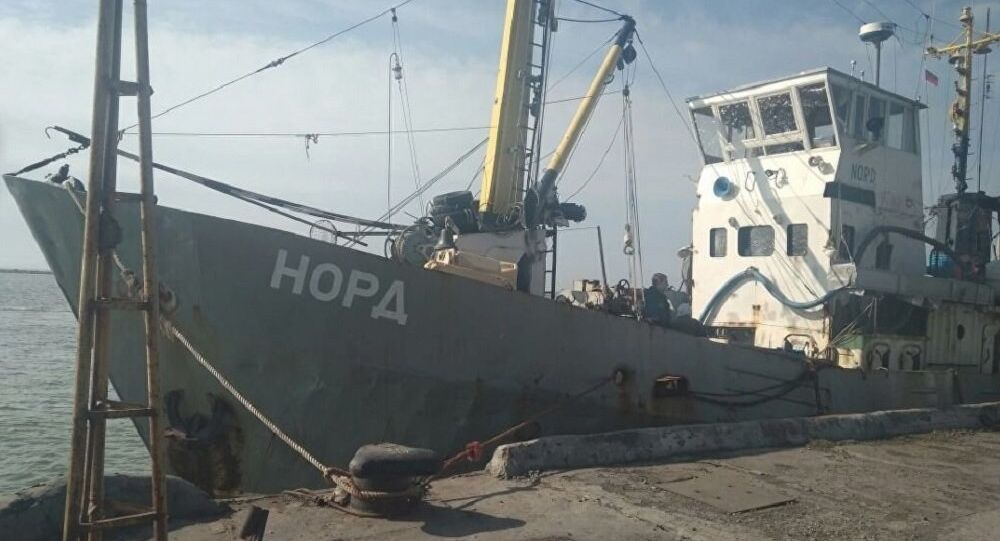 KIEV (Sputnik) - A Ukrainian court authorized on Friday the arrest of the captain of the detained Russian fishing vessel Nord until May 31 with the possibility of bail, Ukraine's General Prosecutor's Office said.

Russian-flagged Crimea-registered fishing vessel Nord with 10-men crew was detained by the Ukrainian Border Guard Service on March 25 in the Sea of Azov. Moscow has demanded the immediate release of the "illegally detained" crew and the return of the vessel to its legitimate owner.

The hearing on the measure of restraint against Nord's captain Vladimir Gorbenko was held earlier in the day.

"The detention has been authorized until May 31 with possibility of a bail in the amount of 35,240 hryvnia [some $1,352]," a spokeswoman for the so-called Crimean prosecutor's office (a structure created as part of the General Prosecutor's Office of Ukraine after the reunification of the peninsula with the Russian Federation).

Gorbenko’s attorney Dmitry Shcherbina told Sputnik that the bail was posted but there is no confirmation yet of the money reaching the treasury account. As the institutions are already closed for the weekend, it is unlikely that something can be done on Friday, Shcherbina said.

The Russian Security Service in Crimea initiated proceedings under Article 211 of the Russian Criminal Code in relation to "hijacking an aircraft, sea vessel or railway train."

Crimea seceded from Ukraine and reunified with Russia after 96 percent of its residents supported the move in a referendum in March 2014. The vote was held after new authorities took power in Kiev after what many considered to be a coup. Ukraine refused to recognize the referendum and still considers Crimea its "temporarily occupied" territory. Russia has repeatedly stated that Crimean residents decided to rejoin Russia in a democratic procedure and that the referendum was conducted in compliance with international law.