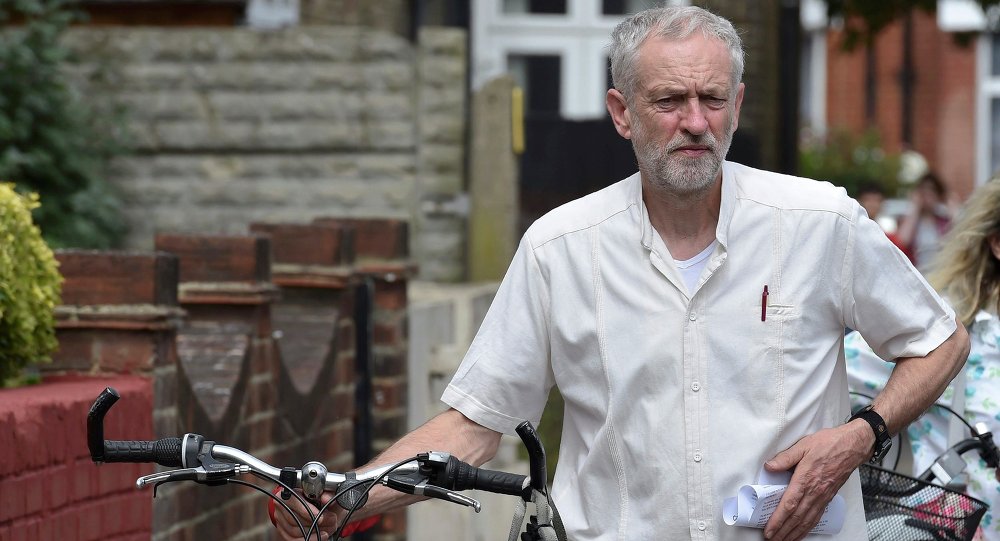 LONDON (Sputnik) - The latest uproar over alleged anti-Semitism within the UK Labour Party is based on lies, and are nothing but a continuation of previous attempts by the political opponents to defame and unseat the party leader Jeremy Corbyn, Naomi Wimborne-Idrissi, a spokeswoman with Jewish Voice for Labour (JVL), told Sputnik on Wednesday.

"They've been doing it since before Corbyn became leader. When his name appeared on the list as a possible candidate, back in 2015, they started trolling [now Shadow Chancellor of the Exchequer] John McDonnell's Facebook posts during the Gaza conflict in 2014 and finding out he'd expressed sympathy with Palestinian activists. So now we get people saying that Jeremy Corbyn is a terrorist, Jeremy Corbyn hates Jews, and it's all based on a tissue of lies and fabrications," Wimborne-Idrissi said.

The JVL spokeswoman expressed concern that "nobody knows what real anti-Semitism is any more," noting that anti-Zionism and anti-Jewishness are not the same thing. 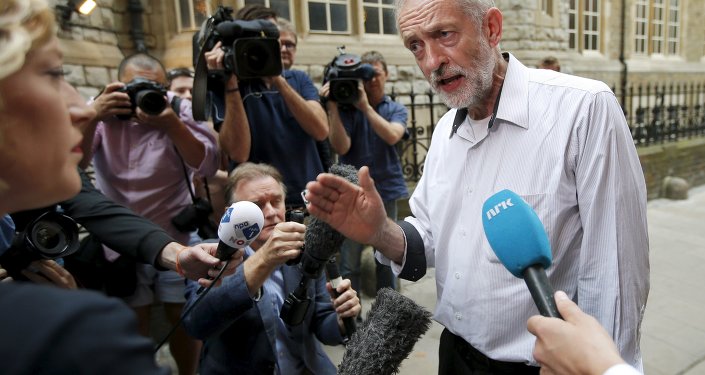 © REUTERS / PETER NICHOLLS
Corbyn's Stance on Skripal Case Ignites Hostile Media Campaign - Analyst
"The Zionists of course want to get at anyone who supports Palestine, and for the Blairites it's just about getting Corbyn at any costs, it's obvious, yet people say this is about anti-Semitism. Yet how do you combat anti-Semitism? You get out there and start doing what Corbyn has been doing all his life, by actively opposing racism in any form when it rears it's head," Wimborne-Idrissi continued.

Hundreds of activists from the Board of Deputies of British Jews (BoD) and the Jewish Leadership Council (JLC) took to Parliament Square in London late on Monday, claiming Corbyn is siding with anti-Semites and turning a blind eye on anti-Semitic views within the party. Yet party members loyal to Corbyn claim the action is a part of a long-term campaign to unseat him ever since his surprise ascent to the leadership in 2015.

Over the past years, membership of several Labour Party members was suspended after it had been revealed they had been involved in anti-Semitic actions.

In the most recent case early in March, Labour suspended party members over comments made on a pro-Palestinian Facebook group, which Corbyn had been following until 2015. In response to these revelations, McDonnell promised firm action if members of the group, linked to the party, are found expressing anti-Semitic views.

"Why are all these people in the Labour Party being suspended for anti-Semitism? Because the apparatus of the Labour Party is peopled by those who were there before Corbyn took over … So what these people do is spend their time trawling through Facebook posts going back years, finding tenuous connections for anything apparently anti-Semitic and using anything criticism of Israel to suspend members," Wimborne-Idrissi pointed out.

The Zionists want anyone supporting Palestine to be punished, while the supporters of ex-Labour leader and former UK Prime Minister Tony Blair are willing to overthrow Corbyn at any cost, the activist continued.

"Yet how do you combat anti-Semitism? You get out there and start doing what Corbyn has been doing all his life, by actively opposing racism in any form when it rears it's head," Wimborne-Idrissi said.

© REUTERS / Peter Nicholls
'It Is an Attack on Corbyn': There Are Powers Beyond The Party - Analyst
Monday’s protests broke out following claims that that the Labour leader had spoken approvingly of an allegedly anti-Semitic mural back in 2012.

The mural depicted a group of businesspeople, some apparently Jewish, counting money on a Monopoly board perched atop several clearly subdued figures with dark complexions.

Whereas Corbyn has recently stated the image is "deeply disturbing," opponents inside and outside the Labour Party maintain the incident is symptomatic of Corbyn's apparent inability to tackle anti-Semitism within the party.

The anti-Corbyn demonstrations were also met by several contingents of counterprotesters, some of them hailing from Jewish organizations such as the Jewish Socialist Group and the JVL.

Although relatively few in number, the counterprotesters delivered a uniform message of support for Corbyn, in the process denouncing both anti-Semitism and alleged attempts by forces inside and outside the party to score political points at Labour's expense.

'It Is an Attack on Corbyn': There Are Powers Beyond The Party - Analyst