The influx of migrants into Europe in recent years has reportedly led to a surge in crime and the emergence of “no-go” zones in many European nations, particularly Germany and Sweden.

Swedish Prime Minister Stefan Lofven denied the existence of such "no-go" zones in Sweden earlier this week, during a joint press conference with US President Donald Trump, contradicting reports by Swedish and international media.

"We also have problems with crime. Organized crime in Sweden. Shootings. But it is not like you have these ‘no go zones'. We have dealt with it. I am dealing with it every day. Allocating more resources to the police. More policemen trained. More resources to the security police. Tougher law on crime. Tougher law on terrorism. Deporting terrorism. So we do a lot to combat that and we can also see some results now in our three major cities," PM Stefan Lofven told reporters.

According to his response, "no-go" zones in major Swedish cities — such as the capital, Stockholm — are a thing of the past, with additional investment in law enforcement eradicating the issue, though some organized crime still exists throughout the country.

"The prime minister is being dishonest via semantics. In fact, these areas [no-go zones] have increased from 53 in 2016 to 61 in 2017, and the police have described the situation as an emergency," a prominent Swedish YouTuber, who goes by the name "Angry Foreigner", told Sputnik, citing Swedish daily newspaper Aftonbladet.

It seems that PM Lofven is attempting to address concerns — both domestic and international — regarding surging crime statistics, which are viewed by many as being caused by Sweden's immigration policy, well-ahead of the 2018 election, which is scheduled to be held this September.

Most Swedish politicians previously denied or downplayed the issue of migrant crime in Sweden, but it seems they are changing their strategy in a bid to cling onto power, and prevent populist, anti-migrant parties — such as the Sweden Democrats — from gaining support and influence in the country's political apparatus.

READ MORE: 'Swish for Migrants' One of Sweden's 'Fastest-Growing Companies'

Many European nations — including Germany, France, and most recently, Italy — have witnessed the rise of such parties in recent elections. 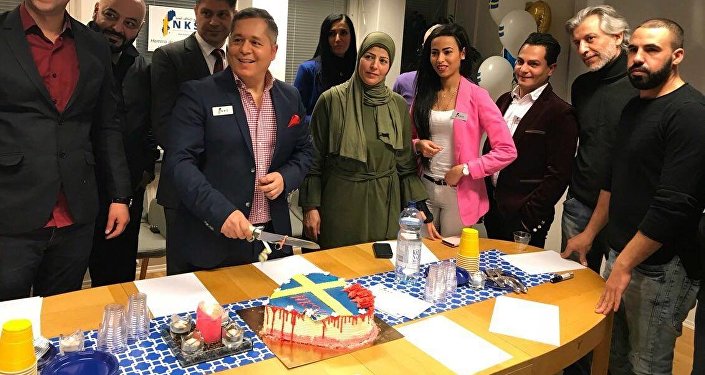 © Photo : Nya Koalitionssamlingen / facebook
Sweden's First 'Immigrant Party' Gets Into 'Blood' Scandal
Instead of denying the issues of migrant crime altogether, the Swedish government is now attempting to portray the matter as contained and resolved as a result of the government's policies.

"The majority of our militant Islamists who traveled abroad to join ISIS are from these areas. These are parallel societies where police, firetrucks and ambulances are attacked with rocks as soon as they drive in. Where criminals have more control over the neighborhood than the police, and where people are too afraid to testify about crimes. The only reason we don't officially call them ‘no-go zones' is because the police drive in anyway," the YouTuber added.

Due to its migrant-friendly policies and welfare program, Sweden, alongside Germany, has proven to be one of the most popular migrant destinations in Europe, with hundreds of thousands of migrants settling in the country in a matter of years.

Swedish police released a list of "vulnerable areas" in 2017, and later expanded the list, suggesting that the crisis was in fact worsening as of last year.