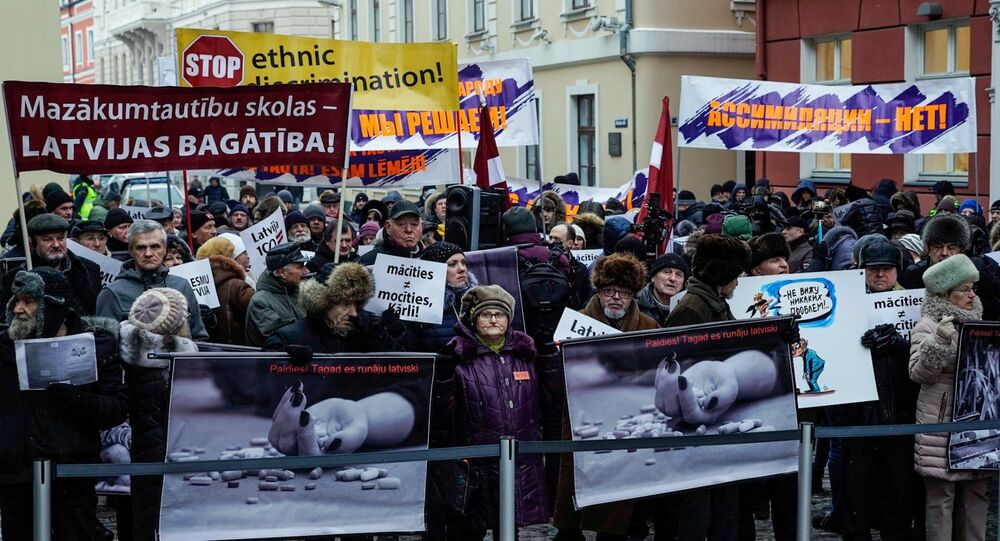 RIGA (Sputnik) - A new rally against the Latvian government's plan to abolish the Russian-language education in public schools was held in Riga on Saturday, the event's organizers told Sputnik.

In January, the Latvian Cabinet of Ministers adopted amendments to the law on education, setting forth a gradual transition to the Latvian language. The procedure will commence on September 1, 2019, and is expected to end by September 1, 2021.

The rally took place on the 229th anniversary of the establishment of the first Russian school in Latvia.

TWEET: Inhabitants of Riga stand for the Russian language.

Latvia, Riga, 24.02.2018. The protest rally of Russian-speaking Latvians. Russian school in Riga was founded in 1788 at the order of Russian Empress Catherine the Great.

"[Russian schools] are our cultural heritage, the basis of our identity and the guarantee of preserving our national traditions," the organizers said.

© AFP 2021 / Ilmars Znotins
Standalone Russian Language TV Channel Unlikely to Succeed in Latvia - PM
During the rally, the organizers collected signatures of parents of schoolchildren in support of preserving the Russian-language education. The signatures would be then submitted to the Latvian parliament, president, the United Nations, the European Union and UNESCO.

On Thursday, the Latvian parliament approved in the first reading a language reform, which envisages a gradual transition to the Latvian language in schools of the country's ethno-linguistic minority groups. The legislation now has to pass through two more readings in the parliament and will then be submitted to Latvian President Raimonds Vejonis for approval.