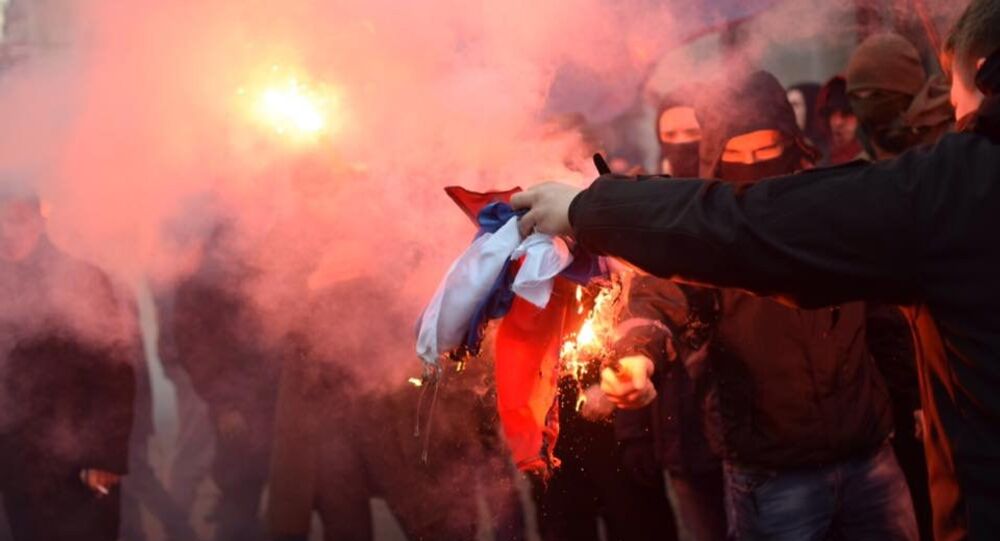 The Russian embassy in Ukraine told Sputnik on Saturday that it had sent a note of protest to the Ukrainian Foreign Ministry over the attack on the Russian Center for Science and Culture in Kiev, calling the authorities to hold the attack perpetrators accountable.

Earlier in the day, dozens of Right Sector thugs broke into the center and caused significant damage to the building. The hoolginas have painted the walls of the Russian center with insulting anti-Russian slogans, demolished information and exhibition stands, poured paint over CCTV cameras, and burned a Russian flag.

Meanwhile, Russia is concerned by information about Ukrainian police lifting security measures at the Russian Center for Science and Culture in Kiev, Alexander Lukashevich, Russia's permanent envoy to the Organization for Security and Co-operation in Europe (OSCE), said on Saturday.

"Alarmed by Information on withdrawing by Ukrainian authorities security guarantees from Russian Cultural Center RCSC in Kiev. By this Ukrainian police becomes accomplice with the radicals who plan to burn RCSC," Lukashevich said as quoted by the Russian Mission at the OSCE in a Twitter post.

The post also showed attached a letter of the Ukrainian Police Protection force notifying the center that the police were breaking their contact for ensuring the center’s security unilaterally due to "force majeure" circumstances.

Earlier in the day, Lukashevich said that the Organization of Ukrainian Nationalists (OUN) planned to set ablaze the building of the Russian center on Sunday.

In January, Ukrainian nationalists splattered with paint the Russian center building and glued leaflets with anti-Russia slogans on it. They also wrapped a chain around the center’s gates and hung a lock on them.

Moreover, the Russian embassy building in Kiev and other Russian organizations’ offices in Ukraine have also recently been targeted by nationalists.

The diplomatic mission also expressed indignation at "yet another" aggressive action against the Russian Center for Science and Culture, conducted in violation of the the Vienna Convention on Diplomatic Relations of 1961, and the Russian-Ukrainian bilateral intergovernmental agreement on the establishment and operation of cultural centers of 1998.

On Friday, Ukrainian radical activists announced they would hold a rally in central Kiev and march to the Russian Center for Science a Culture in commemoration of the February 2014 violent clashes between protesters and law enforcement, commonly referred to as the Euromaidan.