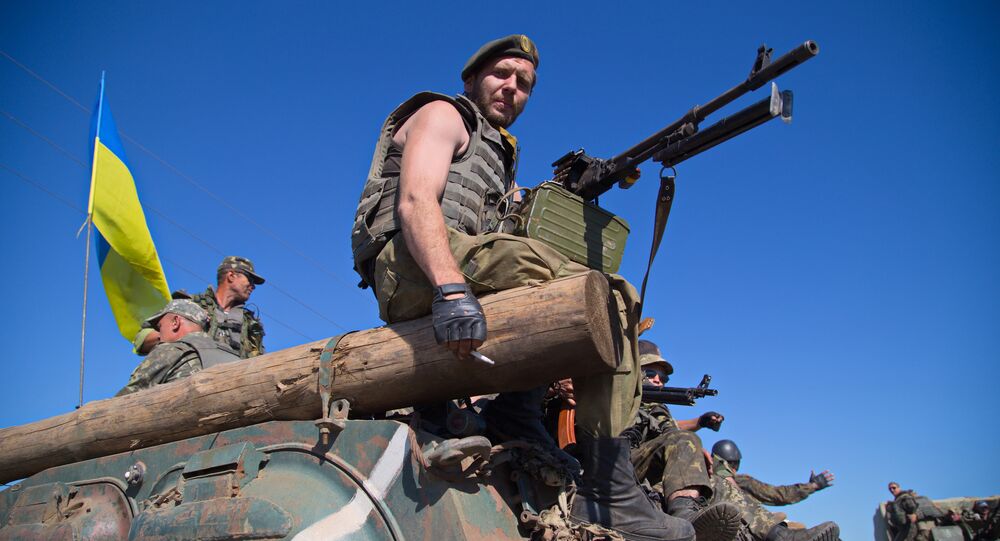 On Sunday, the Operational Command of the self-proclaimed Donetsk People's Republic reported that Ukrainian troops had shelled positions of the Right Sector, despite the ultra-nationalists ostensibly being on the same side of the three-year-old conflict. Russian political analyst Alexander Kazakov told Sputnik that the shelling wasn't accidental.

© Sputnik / Alexandr Maksimenko
Moscow Opens Criminal Case Against Two Russians for Right Sector Involvement
The positions of the radicals, not far from the city of Mariupol in southeastern Ukraine, were shelled using Grad multiple launch rocket systems, the most widely-used in the world. However, the attack wasn't launched by some phantom menace from the East, but from the positions of the Ukrainian armed forces.

Deputy Commander of the self-proclaimed Donetsk People's Republic (DPR) Operational Command Eduard Basurin earlier reported that Right Sector nationalists have arrived in cities and towns of the Donetsk region which are controlled by Kiev. The nationalists, he said, are quite eager to continue the genocide and elimination of the mostly Russian-speaking population of Donbass, unlike many ordinary Ukrainian servicemen.

Sputnik Radio discussed the incident with Alexander Kazakov, director of the Moscow-based Stolypin-Struve Center for Liberal-Conservative Policy, who suggested that it was not the "accidental fire of friendly forces."

"It looks like these two forces are no longer friendly towards each other. The memories of Ukrainian servicemen have not failed them yet and they remember only too well how the punitive battalions of the ultra-right used to stand up behind their backs as anti-retreat units," he told Sputnik.

Besides, he added, these punitive battalions very often go to the frontline to provoke the responsive fire of the self-proclaimed DPR and Lugansk People's Republic (LPR) by shelling their forces. And the responsive fire [is targeted at] the positions of Ukrainian servicemen.

The political analyst suggested that Kiev is interested in getting rid of as many ultra-nationalists as possible in the course of the fighting.

© Sputnik / Stringer
DPR Forces Deputy Commander Accuses US, NATO of Unofficially Supplying Arms to Kiev 'For a Long Time'
He recalled the words of the head of DPR, Alexander Zakharchenko, who was once asked by journalists what the purpose of these attacks of the Ukrainian forces was, when it is only too clear that they will be repelled and the Ukrainian forces will suffer losses. Zakharchenko then said that one of the purposes is getting rid of ultra-nationals, whom Kiev does not know what to do with.

Kiev will eventually be forced to do something with these ultra-radicals, whose arms are "steeped in blood up to the elbows."  And these are not empty words, Kazakov said, as there are huge piles of proven material about their crimes, both war-related and crimes against humanity.

"These people have no turning back, but where will they go now? Kiev is interested in their elimination," Alexander Kazakov told Sputnik.

"Around 9 pm on August 7, a column of five buses and five KrAz armored trucks was spotted near the city of Marinka (which is under Kiev's control) and another column of 28 trucks — near the city of Kramatorsk (also under control of Kiev.) Both columns were carrying the Right Sector nationalists and were moving towards the area of responsibility of the 59th Brigade [of Ukrainian armed forces]," a representative of the DPR Operational Command told journalists.

© Sputnik / Stringer
Over 5,000 Militants Estimated to Be in Ukraine's Right Sector - Investigative Committee
According to him, the Right Sector fighters are moving to the south of Donbass to "take revenge on the Ukrainian servicemen for the deaths of their companions."

"In this connection, all the units of the Ukrainian forces, which are deployed close to Mariupol, have been put on combat alert. The command of the anti-terrorist operation (which is how official Kiev refers to its military operation against its own people  in the south east of the country) is planning to use all its means and forces for the  full elimination of the newly-arrived radicals and further accusation of DPR armed forces through the mass media under its control,"  said DPR Operational Command.

Stanislav Byshok, a political analyst with the international monitoring organization CIS-EMO, commented to Sputnik Radio on the above developments, saying that the Right Sector feels "offended and humiliated" by the recent shelling.

However he suggested that it won't result in any serious clashes among the Ukrainian armed forces. Nevertheless, he said, that the morale of both Ukrainian servicemen and voluntarily battalions is very low as they simply do not understand what they are doing in Donbass.

Originally, they came to liberate Donbass from the so-called pro-Russian forces, however later it turned out that these forces constitute the overwhelming majority of Donbass.  Now the Ukrainian armed units simply don't understand whom they are fighting with. Such conditions either lead to alcoholism, looting or infighting, between the units of the Ukrainian army and the Right Sector, among others.

"We should take into account that the Right Sector is not that mighty, large, fearful and heroic, as it was presented in the times of Maidan and the first year of the military operation in the south east of Ukraine. However the Right Sector continues presenting itself as a certain elite force which the Ukrainian armed units want to abuse and humiliate. Hence all the above has nothing to do with flare-ups on the frontlines, but merely indicates an internal conflict between the two," he concluded.