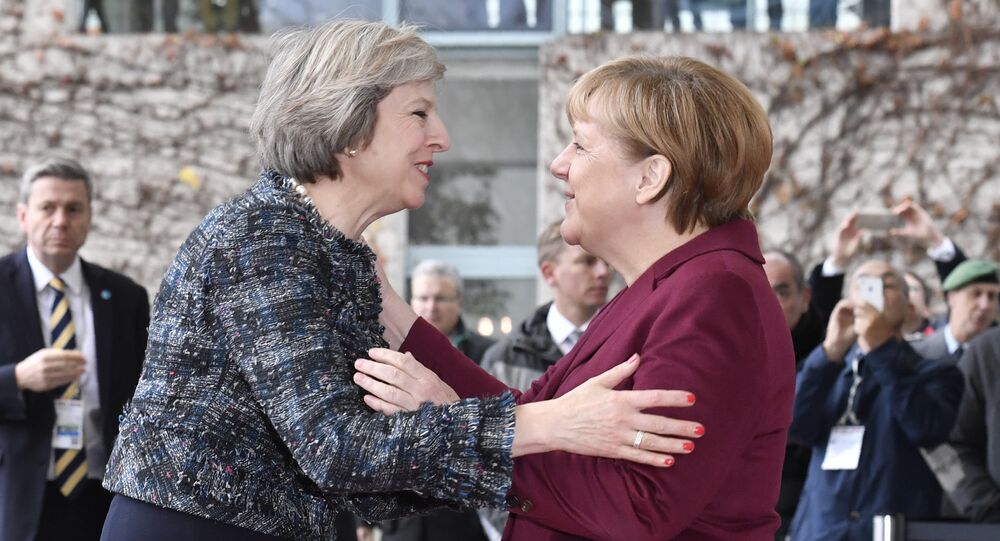 The export-dependent German economy experienced an unprecedented boost in 2017, maximizing its growth.

According to the latest report issued by the Federal Statistical Office (Destasis), German exports in 2017 constituted some €1,279.4bn, marking a staggering 6.3 percent rise in comparison with 2016.

The lion's share of exports went to the EU Members States, as Germany increased its export share to the EU member states by another 6.3 percent from the previous year, sending some €750bn worth of goods to its European neighbors.

READ MORE: Brexit May Bring Up to 100,000 Jobs to Germany's Frankfurt Rhine-Main Area

© REUTERS / Tony Gentile
Theresa May's Week of Dismay Continues as UK GDP Puts It Last in G7 for Growth
The economic surge reflects Germany's assertive stance in post-Brexit Europe, as Berlin seeks to capitalize on Britain's withdrawal from the single market and the customs union.

In fact, a study by the WHU- Otto Beisheim School of Management found that about 88,000 jobs could be created in Frankfurt and the Rhine-Main area due to negative consequences of Brexit for the UK's financial sector.

Following its decision to withdraw from the European Union in June 2016, Britain has been struggling to maintain its economic strength.

READ MORE: Is Time Running Out on UK Premier or Could Pessimistic Growth Report Be Wrong?

However, 2017 was not kind to the British economy, which lost its ranking as world's fifth largest economy to another EU rival, France.

The UK also sank from the top to the very bottom of the G7 table of fastest-growing economies, trailing behind the US, Canada, Japan, Germany, France, and Italy.