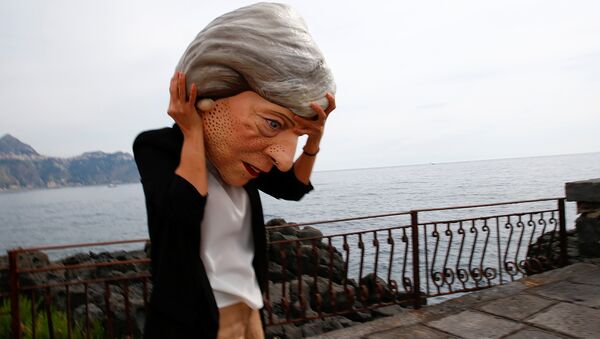 © REUTERS / Tony Gentile
Subscribe
It's not the best of times for UK Prime Minister Theresa May - not only is she losing the huge landslide that she held at the start of the election campaign, she is also faced with the UK's current Gross Domestic Product (GDP) figure putting the country at the bottom of the G7 list.

UK Consumers Face Income Declines Amid Higher Inflation, Slower GDP
The GDP figures, published by Canada on May 31, confirmed what many financial experts and economists already knew. The UK's 0.2 percent growth in the first quarter of 2017 put it next to Italy as the slowest-growing in the league table of the world's advanced economies.

The figures published showed that the UK economy had been slightly sluggish, house prices fell for the third consecutive month in May, and this is the first time since 2009. Figures for May 2017 also suggested that consumers were feeling the financial pressure, with inflation rising to 2.7 percent, its highest level since September 2013.

​However, forecasts by the Bank of England have suggested inflation will continue to rise, despite weak growth in wages.

"My hunch is that in 2017-18 we will see higher near-term inflation, plus a greater rotation of growth away from consumer spending and towards investment and net trade," said Michael Saunders, a member of the rate-setting monetary policy committee, in a recent interview.

Moody's, a credit ratings agency said that this current slump in the UK's GDP result could be down to Brexit and that Britian's leaving of the EU has caused this slowdown.

"Moody's still expects weaker growth as investment spending slows as Brexit negotiations get under way and consumers feel the impact of accelerating inflation," a spokesperson from Moody's said.

​Other countries on the other hand appear to be doing quite well — Canada for example, where gross domestic product grew at an annualized rate of 3.7 percent in the first three months of the year.

According to experts this was helped by the boost to household spending and a turnaround in business investment.