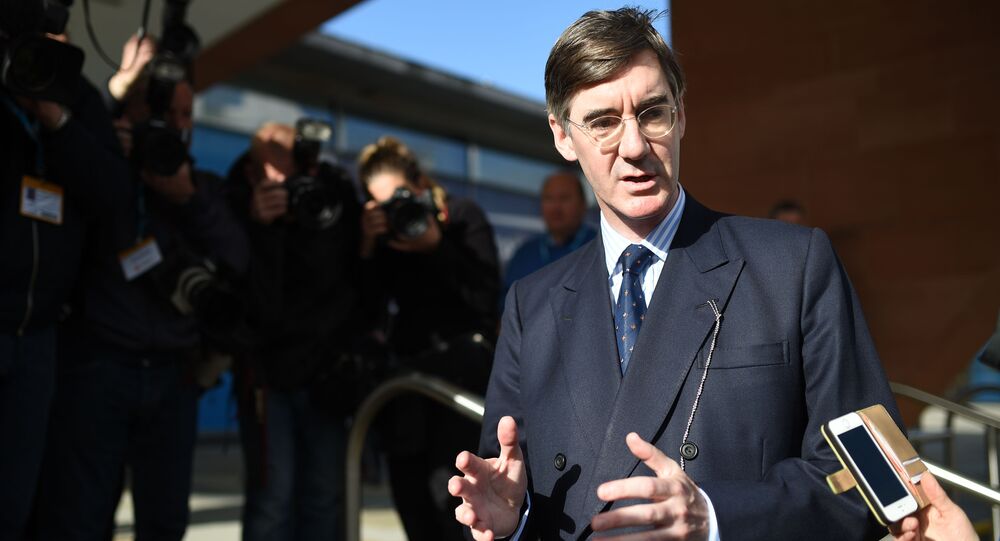 The activists allegedly broke into a university lecture room where the Brexit-supporter was holding a speech and started to verbally abuse him.

Politicians across the British political spectrum criticized a recent violent incident that took place at the University of West England (UWE) in Bristol and involved Tory MP Jacob Rees-Mogg.

A group of protesters wearing balaclavas reportedly stormed a university debate where Rees-Mogg was holding a speech and hurled verbal abuse at the politician, calling him "a Nazi, a fascist and a racist" before a violent brawl broke out.

Following the incident, Universities Minister Sam Gyimah said he was very disappointed that a chance to engage in a debate was sabotaged by the protesters.

Extremely disappointed that a genuine opportunity to engage in debate was nearly thwarted by thuggish behaviour. Free speech under the law is fundamental to our democracy. Well done @Jacob_Rees_Mogg for not be cowed into silence.

In her turn, Angela Rayner, shadow education secretary, said that she "utterly" condemned the protesters who decided to attack the politician while he was holding his speech.

My politics are not those of @Jacob_Rees_Mogg however l utterly condemn the behaviour of those tonight who tried to attack him whilst he was due to speak at an event he was invited to. It's extremely intimidating for any MP who travels alone to an event to be treated like this 👎

A video of the incident has recently been released online. Police are currently investigating the case.

The incident came a few days after Jacob Rees-Mogg confessed that he "deeply regrets" attending an event alongside far-right activist Gregory Lauder-Frost, who was revealed to have made racist comments about black and Jewish people.

Jacob Rees-Mogg, a strong Brexiteer, who is considered a favorite to be the next Tory leader, was caught on camera beside Lauder-Frost at a dinner five years ago after he was invited to the event by the Traditional Britain Group.

The politician said on Wednesday that, despite the fact that he received warnings about the organization's controversial views, he didn't find any corresponding evidence and decided to attend the event in spite of the warnings.