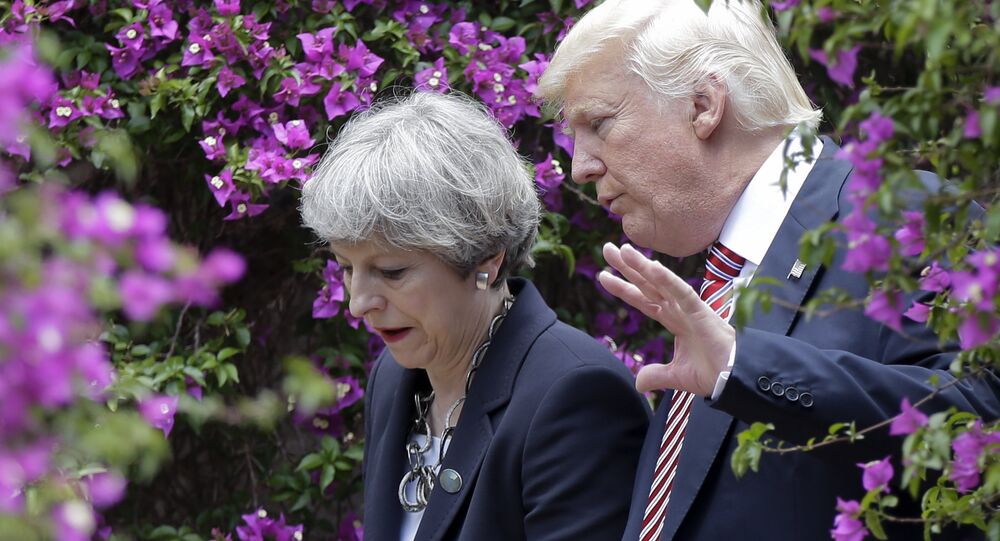 The US president says the British Prime Minister Theresa May should employ a more decisive approach in handling the ongoing Brexit talks with the EU.

Kristian Rouz — President Trump said he would take a more hardline approach to handling the Brexit process if he were the British prime minister, adding the current pace of talks between the UK and EU is insufficiently productive.

"Would it be the way I'd negotiate? No, I wouldn't negotiate it the way it's negotiated," President Trump said. "I would have said that the European Union is not cracked up to what it's supposed to be and I would have taken a tougher stand in getting out."

The president made his remarks only several days after he and British Prime Minister Theresa May held bilateral talks on the sidelines of the World Economic Forum in Davos, Switzerland. The sideline talks reiterated that US-British relations are solid, and pledged to further enhance bilateral cooperation.

Trump also said he had "predicted" the outcome of the Brexit referendum before it took place in June 2016. He said Brexit happened due to the Brits' irritation over mass-migration and the related surge in crime, poverty, and cultural turmoil.

"I said because of trade, but mostly immigration, Brexit is going to be a big upset. And I was right," President Trump said. "I know the British people and understand them. They don't want people coming from all over the world into Britain, they don't know anything about these people."

Some point out that the president's comments might cause slight disappointment at PM May's office. However, his take on the matter reflects the view of the UK's private-sector enterprises, as the lengthy Brexit talks have stirred market volatility and hampered investment sentiment — resulting in the British business community demanding more decisive steps from the Tory and Unionist Cabinet.

© AFP 2020 / Daniel LEAL-OLIVAS
Unknown Brexit Costs Limit UK's Ability to React to Economic Shocks - Parliament Committee
PM May is under pressure from the Brexit hardliners within her own party as well — but President Trump's criticism is expected to spark mixed reactions in London rather than weaken May's position.

This comes as British media discuss the PM "leadership crisis." Whilst left-leaning outlets tend to repeat their regular pro-Remain and anti-Tory routine, right-wing commentators reveal a deeper divide within the Conservative cabinet.

Kate McCann, political correspondent for The Telegraph, wrote that many Tory MPs see PM May as "timid" — which falls in line with President Trump's remarks. At least 60 Conservative MPs, led by Jacob Rees-Mogg, say the Cabinet's approach to Brexit, and the tone in ongoing negotiations, must "fundamentally change."

Prime Minister May was also described by the Financial Times as leading a Cabinet "cowering and terrified of the future".

Trump also stressed he has "a lot of respect for (British) prime minister, and I think that (the UK is) doing a job" on moving the Brexit negotiations forward.

The president said he is invited to visit the UK twice this year — by PM May. The date has yet to be set for a full state visit later this year.