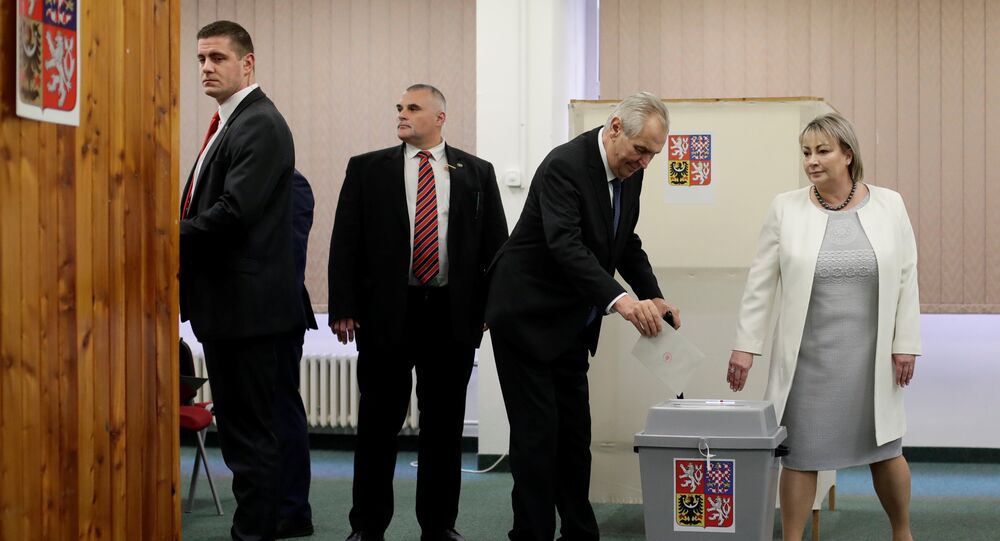 PRAGUE (Sputnik) - The Czech Republic's incumbent President Milos Zeman has gained 52 percent of votes after voting ballots have been counted in 95 percent of the polling stations, thus rendering victory unattainable for his main rival in the second round of presidential elections, the country's Statistical Office said Saturday.

Zeman's rival, Jiri Drahos, has gained 47.8 percent of the vote, according to the Statistical Office.

"About 2.64 million people voted for Zeman, while 2.42 million voted for Drahos. Zeman has won in 11 out of 13 regions and lost only in Prague and the Central Bohemian Region," the Statistical Office said.

Meanwhile, Drahos conceded his defeat in the second round of the presidential elections and congratulated Zeman on his victory.

"We did not win this election, but we did not lose as well. I am proud that we, by our participation in the elections, have raised a huge wave of energy. I am confident that this energy will not disappear, that it will remain for the benefit of the republic," Drahos said in a televised statement, adding that he did not intend to leave public life after the elections.

The presidential run-off was held on Friday and Saturday and over 65 percent of the almost 8.5 million registered voters have cast their ballots, according to preliminary data. The inauguration is set to take place on March 8.

The incumbent president has served in the position since March 2013, running as a candidate from the Party of Civic Rights, which he founded in 2009.

Zeman is promoting cooperation with China and Russia, and opposes accepting refugees from Islamic countries. Drahos, in his turn, argues that Prague should focus on a Euro-Atlantic direction in its foreign policy, calling for keeping anti-Russia sanctions and distancing himself from a close partnership with Beijing.