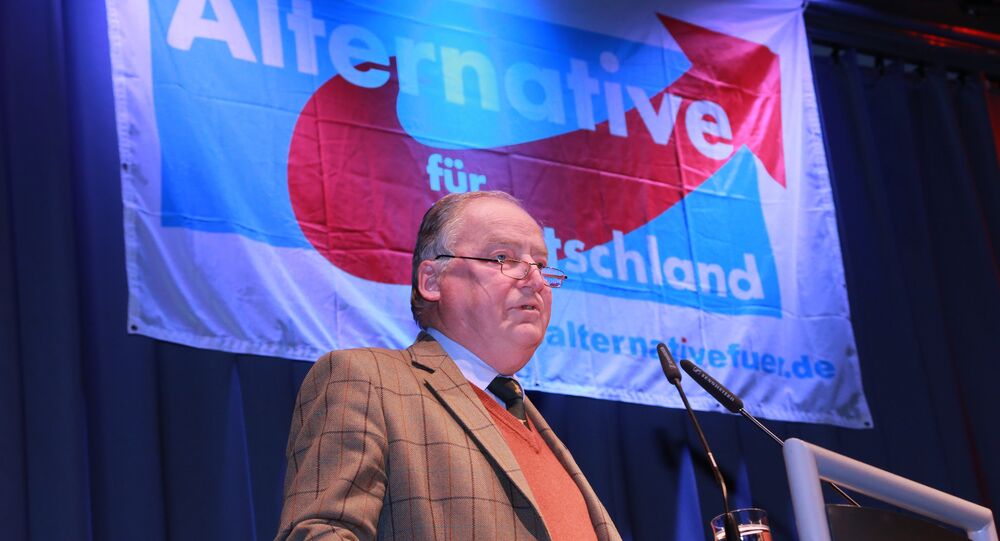 On Monday morning, the German Chancellor emerged without agreement on forming a new coalition government from marathon talks, that promotes the chance of new elections. The leader of the AfD party gave his vision on the situation.

BERLIN (Sputnik) — According to the head of Alternative for Germany (AfD) Alexander Gauland, the "time has come" for Angela Merkel to leave the post of the German chancellor, as she "failed" to form a new German coalition government.

This comes as earlier on Monday the German Free Democratic Party (FDP) announced its withdrawal from the coalition talks with the union of the Christian Democratic Union of Germany (CDU) and Christian Social Union in Bavaria (CSU), led by Merkel, and the Greens (prospective 'Jamaica coalition'). The latest set of talks broke up at 4 am local time on Friday, November 17, but the preliminary negotiations on forming a coalition started on October 18. However, disagreements over such issues as migration and climate change have prevented parties from reaching a deal.

The CDU/CSU bloc could agree to form a minority government with the Greens. If no government is formed, a new parliamentary election will have to be scheduled.

© REUTERS / Hannibal Hanschke
Germany's FDP Party Quits Coalition Talks With CDU/CSU, Greens
Moreover, another member of the Alternative for Germany (AfD) Waldemar Birkle supported his counterpart and told Sputnik on Monday that Angela Merkel and leader of the Christian Democratic Union (CDU) and the Christian Social Union in Bavaria (CSU) alliance, should accept the need for re-elections in Germany, after failing to secure a coalition with two other German parties.

"The people of Germany want, first of all, that there is finally stability and certainty in tomorrow… Some people think that if there is a coalition at any price, then there will be stability, but this won't happen. This is a signal to all parties that politics in Germany needs to change at its root. This is what we are trying to achieve," Birkle said.

Besides, Peter Boehringer, an AfD member of the Bundestag fraction, told Sputnik that the party was not afraid of re-elections, but added that a new vote would "not lead to new majorities nor to real solutions for Germany's problems", noting that Merkel was unlikely to resign.

And there she goes! #Merkel has left #Berlin's Schloss Bellevue after informing President #Steinmeier that she's unable to form a government.

We'll know more about what was said behind closed doors and what the future holds for #Germany after Steinmeier's statement at 1330 UTC pic.twitter.com/mfpVJIRobF

​"Personally, I do not believe in a new chancellor. Merkel will do anything to continue her destructive policies against German interests," Boehringer said, adding that most likely, "FDP will tolerate a minority government of CDU-CSU-Greens."

Meanwhile, Germany held a parliamentary election on September 24. Chancellor Angela Merkel's ruling CDU/CSU alliance won the election with 33 percent of votes and secured 246 seats in the parliament, which was nevertheless the worst result for the Christian Democrats since 1949, according to Reuters. SPD came in second, with 20.5 percent of the votes and 153 seats. The Alternative for Germany (AfD) party, which heavily criticizes Merkel’s open-door migrant policy, gained 12.6 percent of votes, thus entering the German parliament for the first time ever, having 94 mandates. However, it ruled out participation in any coalition after the election.

According to recent surveys, most Germans hope coalition talks will succeed and have no appetite for another election.