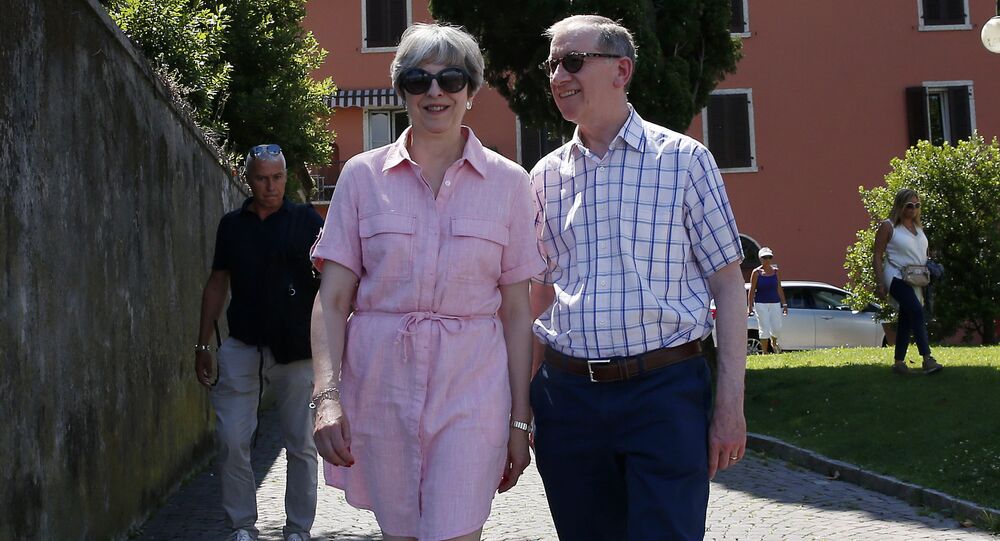 The company that employs British Prime Minister Theresa May's husband used the offshore law firm linked to the Paradise Papers scandal to arrange investments in tax havens. A Downing Street spokesperson however assured Sputnik that the PM and her husband don't have any direct offshore investments.

Philip May, husband of the UK premier, works for investment advisers Capital Group which allegedly used the offshore law firm Appleby to arrange investments for wealthy clients in tax haves, according to new emails leaked to the Private Eye magazine.

The documents suggest Capital Groups has funds registered in the Cayman Islands, which were invested in a Bermuda-registered South American agriculture company called El Tejar. Both Bermuda and the Cayman Islands are offshore jurisdictions and known for their zero rates of tax.

© REUTERS / Eddie Keogh
Britain's Prime Minister Theresa May returns to Downing Street with her husband Philip after traveling to Buckingham Palace to ask the Queen's permission to form a minority government, in London, June 9, 2017.

A government press officer has vehemently denied Mr. May is involved in any investment decisions at Capital Group.

"Mr. May is involved in the development of Capital  Group's retirement solutions. He is not an investor but consults with other Capital associates on retirement products and solutions for clients," he told Sputnik.

The spokesman insisted neither the Prime Minister or her husband have any direct offshore investments, while their financial dealings are handled by a "blind trust" which is a well-established arrangement of all premiers.

Capital Group has yet to comment on the leaked documents and has failed, so far, to respond to a request from Sputnik.

The Labor party has now called for the matter to be urgently investigated, insisting Mr. May, 60, has "serious questions to answer" about his firm's use of tax havens.

"There are some serious questions for Philip May to answer about his firm's use of tax havens, whether he had any knowledge of it and if he thinks this is an acceptable way to do business," said Jon Trickett, Labor's shadow minister for the cabinet office.

"Labor has previously asked Theresa May what her government plans to do to clamp down on the tax havens where money is squirreled away to avoid paying taxes for public services in this country. When it comes to paying tax, there is one rule for the super-rich and another for the rest of us and, in refusing to act, the prime minister appears to condone this," Mr. Trickett is quoted as saying.

The latest leaked emails are part of the cache of documents stolen from Appleby last year and, later exposed by the International Consortium of Journalists. The documents, which detail the complex financial arrangements used by some of the world's richest individuals, have been nicknamed the 'Paradise Papers.'

The use of offshore tax havens to register companies and make investments has come under increased criticism by politicians and activists. There are, however, many legal means by which companies and individuals can structure their finances via offshore jurisdictions to avoid tax, without any wrongdoing.

John McDonnell, the shadow chancellor, called on the British monarch to release her financial information after her private estate was shown to be connected to offshore tax havens. The Queen's private estate, the Duchy of Lancaster, invested millions of dollars in offshore companies, according to earlier leaked data.

What Are the Paradise Papers? Expert Offers Insight Into New Leaks

Paradise Papers: 'The Discovery of the 21st Century' or a Mere PR Stunt?