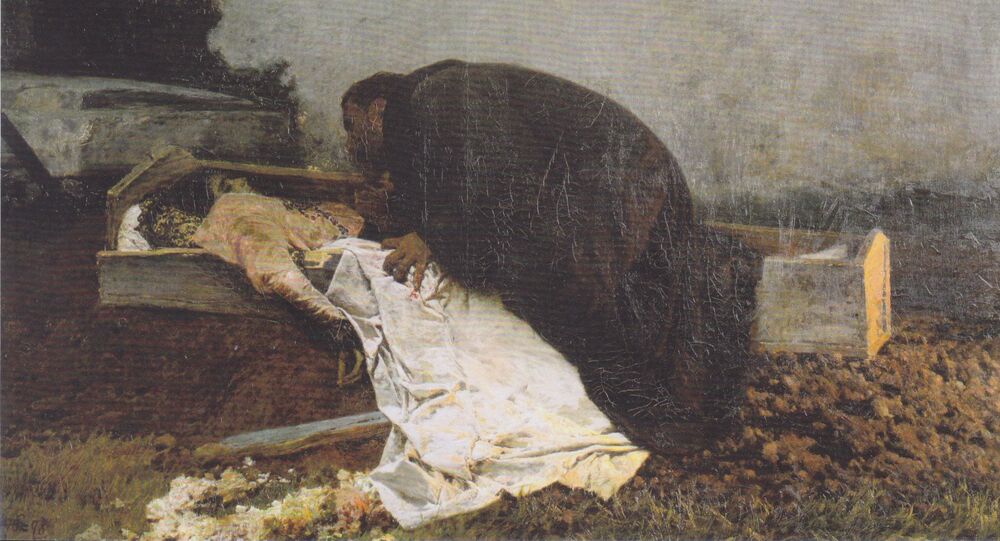 Necrophilia Threat Man Appeals in UK But Why Would You Want Sex With a Corpse?

A British prisoner who threatened to kill a judge, a police officer and a former girlfriend and have sex with their bodies, is appealing against a 45 year prison sentence. Sputnik spoke to a criminologist about necrophilia and whether it is underreported.

Richard Ford, 38, has appealed against a 45 year jail sentence which he was given in 2016, after he threatened to kill several people and have sex with their bodies.

Dr. Roach contributed a chapter to a book about the condition and decided to call it "No Necrophilia Please, We're British."

"I discovered it was actually extremely rare. 1980s serial killer Dennis Nilsen did it, and so did John Christie [a former policeman who was hanged in the 1950s for several murders], but it's very rare," he told Sputnik.

Officers guard the door of 10 Rillington Place, home of serial killer John Christie in 1953 (although this shot is probably from the movie!) pic.twitter.com/d1bVBaPMuP

​Ford was serving a 30-month sentence for possessing a knife but had spent most of the last 14 years in jail when he passed several notes to a prison officer in Nottingham jail revealing plans to kill prison officers, a fellow inmate, a district judge, a police officer and a former partner.

His solicitor Isabelle Wilson said the 45 year sentence had been "unprecedented and manifestly excessive" during a Court of Appeal hearing in London on Wednesday, October 11.

Chairing the appeal, Lady Justice Hallett said Ford was clearly "highly dangerous," but the offense of threatening to kill did not possess a life sentence, which might have been a more appropriate sentence as it can involve be allowed out on licence.

She adjourned the appeal to allow Ford to undergo psychiatric assessment at Rampton Hospital in Nottinghamshire.

Why Do People Do It?

Dr. Roach said it was quite possible necrophilia was underreported.

"People find it too vile to comprehend or to entertain the idea that some do it. Interestingly, despite the lack of reporting, we all seem to know what it is," he told Sputnik.

"Why do people do it? The reasons fall into very different categories. Some people convince themselves it's part of a loving relationship," Dr. Roach said.

He said most people would not wish to judge a mortuary worker who had sex with a stranger's corpse in the same way as a man who keeps his wife's dead body in his bed and "made love" to it, although both were clearly wrong.

"For some it's all about control. It's about owning someone completely. They might even tell someone they are going to kill them and then have sex with their body as the ultimate threat," he added.

​Some people were psychologically traumatized as children by sexual events.

A famous book about Dennis Nilsen, also known as the Kindly Killer, was called Killing For Company, and it described his bizarre life.

Nilsen, a lonely homosexual civil servant who lived in a bedsit in north London, picked up young men in gay bars and brought them home. He would kill them, keep their bodies for days in his bed and have sex with them.

Nilsen, now 71, was caught after dismembered remains blocked the drains and is serving a whole life sentence.

"Evolution has equipped us with revulsion of necrophilia. Firstly every sperm is sacred and you are wasting it on a dead body, and secondly you have a chancing of catching something fatal," he told Sputnik.

Dr. Roach said there were also suggestions pedophile and former BBC television presenter Jimmy Savile had indulged in necrophilia with corpses at a mortuary at a hospital in Leeds.

"In Savile's case, it would have been the ultimate power trip. He felt untouchable and he clearly was," Dr. Roach told Sputnik.

Savile died in 2011 and it was only after his death that it emerged that he had been a prolific pedophile.

Amazingly necrophilia was not actually illegal in English law prior to the Sexual Offences Act 2003.

"Corpses were deemed to be not owned by anybody, so interfering with them was not technically an offense," said Dr. Roach, who said there had been no prosecutions since the law was introduced.

Instagrammer Accidentally Livestreams Herself Having Sex With Boyfriend