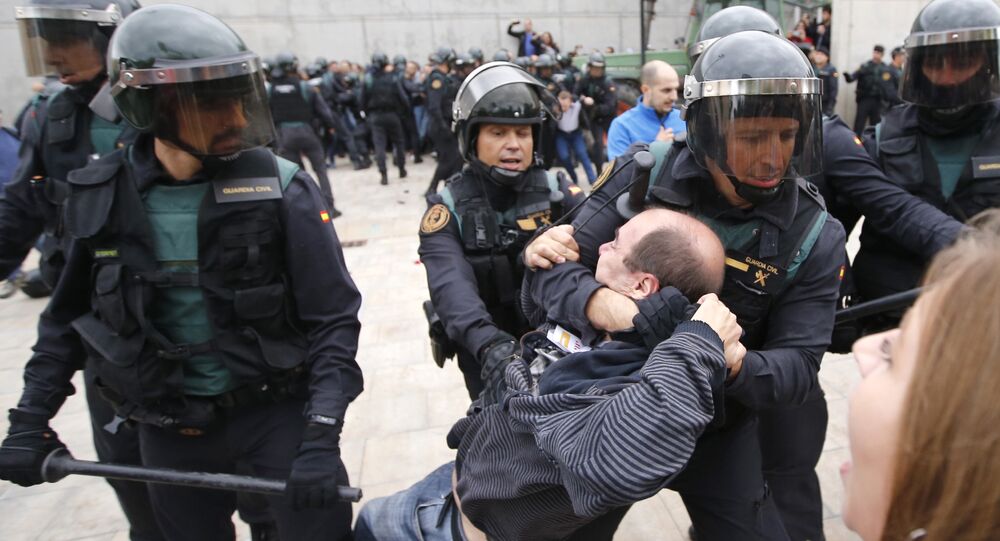 According to a member Italy's Lega Nord party, the EU is wrong to stand back and not intervene in the situation in Catalonia, and failing to criticize Madrid for using force during the region's referendum.

MOSCOW (Sputnik) – The European Union is wrong for standing back and not intervening in the situation in Catalonia and failing to criticize Madrid for using force during the region's independence referendum, Gianmatteo Ferrari, a member of Italy's Lega Nord party, told Sputnik on Monday.

"The EU always intervenes when it's convenient. For example, if the same thing happened in Russia, the EU would obviously called for new sanctions. As it happened in Spain, of course, no one says anything and no one asks for sanctions against Spain," Ferrari said, stressing that "the use of force against peaceful and defenseless citizens is always wrong."

© REUTERS / Francois Lenoir
Spanish Crackdown in Catalonia 'Blow to Democracy' - Italian Lawmaker
The lawmaker added that using force in Catalonia was "a counterproductive move" for the Spanish authorities, because it has drawn more attention to the vote, which Madrid wanted to "pass in silence."

The politician expressed hope for the positive development of the situation, despite the existing tension between the Catalan government and Madrid.

"If there is a political will, a solution is always there. Just meet halfway," Ferrari said.

Catalonia held the independence referendum on Sunday, with the local authorities stating that 90 percent of those who voted supported the secession of the region from Spain. Madrid calls the referendum illegal, with the Spanish Civil Guard attempting to hinder the vote by shutting down polling stations and expropriating ballot boxes, which led to clashes between local residents and security forces. According to the latest reports, as many as 893 people were injured, including 33 law enforcement officers.