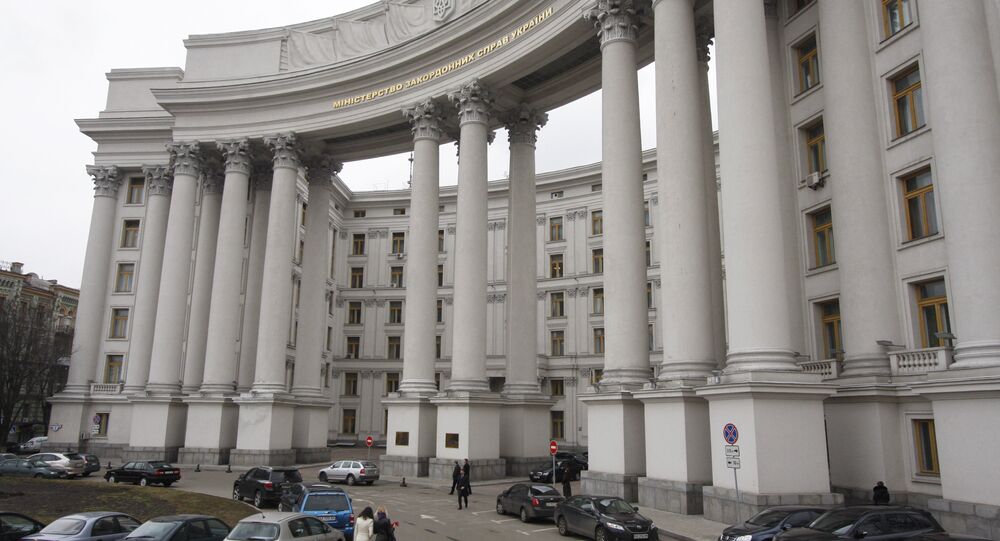 According to a statement issued by the Ukrainian Foreign Ministry, Ukraine is ready to work out the issue of deploying peacekeepers to Donbass.

KIEV (Sputnik) — Ukraine is ready to work out the issue of deploying peacekeepers to Donbass, the mission of Ukraine in New York has been instructed to hold consultations with delegations in the UN Security Council, the Ukrainian Foreign Ministry said in a statement Tuesday, commenting on Russian President Vladimir Putin's statement.

"Ukraine, as a consistent supporter of the initiative to deploy a UN peacekeeping operation in Donbass, is ready to work out this issue. In this regard, the Ukrainian mission in New York has been instructed to hold relevant consultations with delegations in the UN Security Council," the Ukrainian ministry said.

The ministry believes that the deployment of peacekeepers can help restore peace in the region, the statement reads.

"The Ukrainian Foreign Ministry has taken into consideration the statement by the Russian president on the possibility of deploying UN peacekeepers to Donbass, published in media. We believe that the deployment of a UN peacekeeping operation can contribute to the restoration of peace and security in the east of Ukraine," the Ukrainian ministry said.

However, Kiev does not accept the presence of Russians in the peacekeeping mission for Donbass and talks on the issue with the self-proclaimed Donetsk and Lugansk people's republics, the ministry added.

"If the decision is made to begin a peacekeeping operation, there can be no talk of the presence of military or other personnel of the aggressor side in the territory of Ukraine under the guise of peacekeepers, since this will contradict the basic principles of UN peacekeeping activity," the Ukrainian ministry said.

© Sputnik / Sergey Averin
Moscow: Kiev Tries to Sabotage Minsk Deal by Asking for Peacekeepers in Donbass
At the same time, Ukrainian Ambassador to the United Nations Volodymyr Yelchenko said that Kiev has yet to see the text of the draft resolution on the UN mission to Ukraine, circulated by Russia today, but is ready to start discussions at the expert level.

"We took careful note of the intention. I think the intention itself is good, we need to see the content of it," Yelchenko said. "We are ready to work at the expert level, even starting today."

Russian President Vladimir Putin said Tuesday he supported the idea of sending peacekeepers to Ukraine. However, according to him, the mission should only ensure the security of OSCE staff, peacekeepers must be on the disengagement line. He said the issue should be decided after disengagement, the pullout of hardware and with direct contact with representatives of the self-proclaimed Donetsk and Luhansk people's republics.

Putin said he would instruct the Russian Foreign Ministry to submit to the UN Security Council a resolution that would ensure the security of the OSCE mission in Ukraine when these conditions are met.