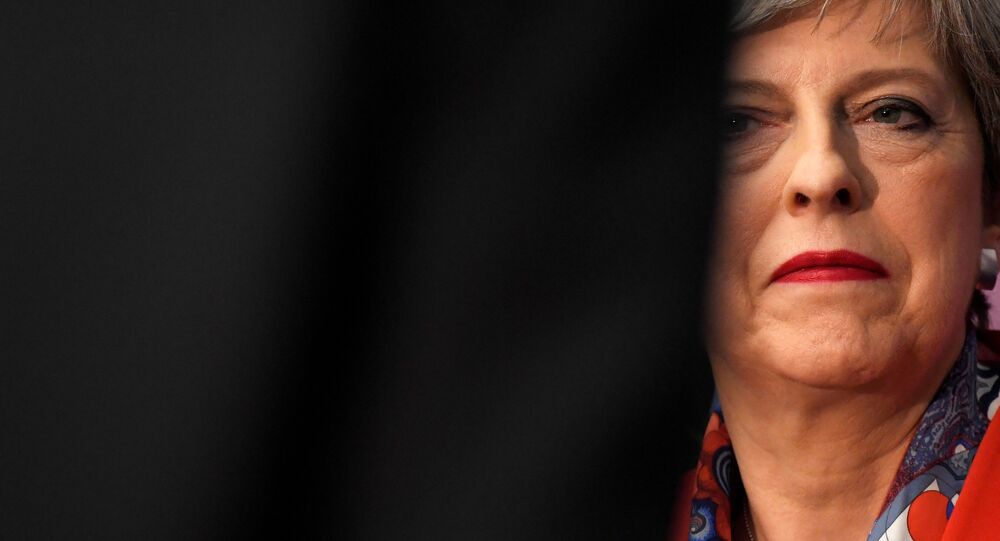 In a mainstream media interview, UK Prime Minister Theresa May ruled out standing down ahead of the next general election. However, comments made by senior Conservative figures suggest the knives are out for the premier, and aren't likely to be retracted. Her invidious predicament recalls that of other embattled Tory leaders past.

While on a state visit to Japan, May was asked at a joint press conference with counterpart Shinzo Abe about the speculation and doubts swirling around her leadership. In response, the Prime Minister acknowledged there had been "an awful lot of speculation" about her leadership in recent weeks, but she was not a quitter, and would "get on with the job" for the "long-term."

"We stand at a really critical time in the United Kingdom. That's partly about getting Brexit right, but… there are many other issues we need to address, long-term challenges in our country, ensuring people don't feel left behind. These are real issues that we need to be dealing with and I'm there to do it. I think for most members of the public, they would say they want the government to get on with the job. And that's exactly what I and the government are doing," she said.

Feels like the reaction among Tory MPs to May saying she'll fight on is "Lol, you're not" not "Oh dear, better putsch her early".

​Strident statements they may have been, but other Conservatives don't share May's certainty. Speaking to the mainstream media, former Education Secretary and Chair of the Treasury Select Committee Nicky Morgan suggested it would be difficult for May to fight another election.

"One of the things that's been missing has been an attempt to reconcile the faultlines in the Conservative party shown up by Europe. It's going to be difficult for Theresa May to lead us into the next general election, we have got to think about how we renew our franchise," he said.

Tory grandee Michael Heseltine, Deputy Prime Minister under John Major, wasn't quite so diplomatic, suggesting Conservative MPs needed to decide whether they wanted a repeat of May's bruising election battle in June, as another election was in his view likely to be held within the next two years.

"My own guess is they won't. The long-term is the difficult one for Theresa May because I don't think she's got a long-term,"

"Colleagues may well be surprised by [May's] interview and it's too early to be talking about going on and on. Let's get some progress for the British people first, I think that's the priority," he said.

Most scathing of all was George Osborne, the former MP and Chancellor under David Cameron turned newspaper editor. He used a column in his organ to compare the Prime Minister to a zombie, comparing her leadership to the "living dead in a second-rate horror film" and saying the UK deserved a "better movie than this."

I suppose Theresa May could have said "I'm a quitter, I'll step down before the next election". That would have boosted her Japan trip…

​However, other figures were more sympathetic — most notably, Conservative MPs Sarah Wollaston and Nadine Dorries took to social media to voice their support.

#TheresaMay right to commit to long term leadership. Calm & effective in her role despite extraordinary pressures of recent months

​​The encouraging words of May's seemingly ever-dwindling supporters may offer little comfort to the Prime Minister.

In July, anonymous briefings indicated at least 15 Conservative MPs had agreed to sign a letter of no confidence in May — a vote, which if successful, would see her unseated as party leader and Prime Minister. The same unnamed sources suggested it was doubtful she would last in her post beyond the party's October conference.

According to modern Conservative party rules, 15 percent of Conservative MPs (48) must sign a no confidence motion to trigger a leadership contest. The last time this resource was used was in 2003, under the leadership of Iain Duncan Smith — the vote saw him lose by 75 votes to 90.

Thatcher provoked fear when she threatened to go on & on. May provokes laughter when she says she just wants to go on.

​Previously, a candidate merely had to announce they were standing.

Most famously, Lord Heseltine challenged Margaret Thatcher in November 1990, seeking to end her 11-year stranglehold on Prime Ministerial power. However, in the spirit of the famous phrase once applied to Augustus — "he who wields the sword never wears the crown" — Heseltine was eventually beaten by John Major, then-Chancellor of the Exchequer.

The initial months of May's leadership drew many comparisons with Thatcher's premiership, parallels that have vanished from mainstream discourse since her general election performance.

In the event, her fall from power could well mirror Major's — much like Major, May has no parliamentary majority, relies on an informal agreement with the Democratic Unionist Party to stay in power, and leads a party bitterly divided over Europe.

Even if May were to face a no confidence vote, it's questionable whether any other MP would wish to throw their hat into the ring — for taking over a government built on such shaky foundations is surely no reward.