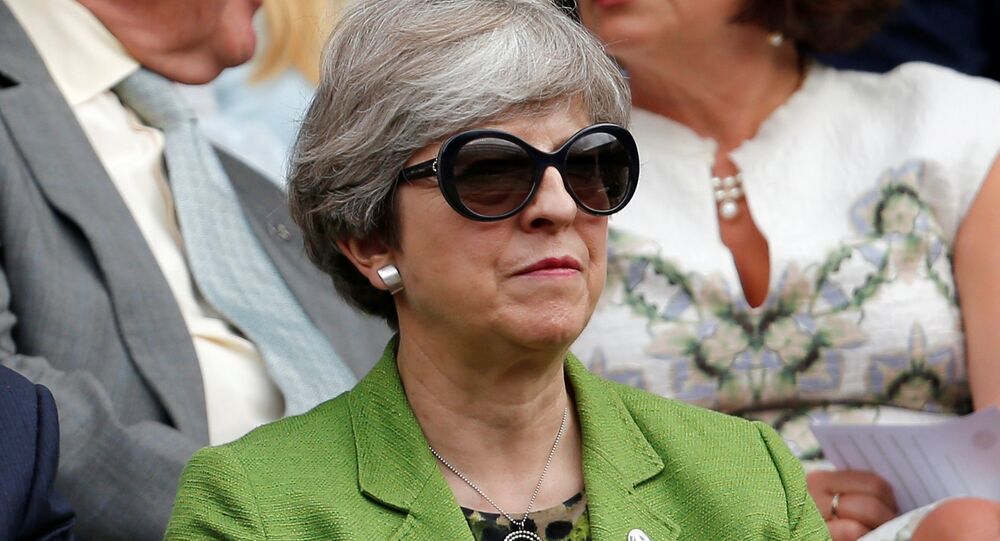 At least 15 Conservative MPs have reportedly agreed to sign a letter of no confidence in Theresa May, a vote, which if successful, would see her unseated as party leader and prime minister – and another general election in short order. Anonymous sources suggest she may not last in her post beyond the party's October conference.

According to Conservative party rules, 48 signatures are required to trigger a leadership contest — and while 15 names obviously falls short of that total, an unnamed former minister has told the mainstream media that this represents the "consistent" core of parliamentarians who wish to see the end of May.

Moreover, they suggested the number of potential signatories fluctuates almost daily, depending on current events.

If such claims are accurate, it's likely May will find much solace in parliament's summer recess, which began July 20 and runs until September 5. With the legislature adjourned and many sectors on effective leave until around then, the potential for crises and mismanagement, two key characteristics of her year and counting in the hot seat, are much reduced.

Nonetheless, the anonymous briefer has said May enduring as prime minister beyond the October 1 Conservative conference in Manchester is a "big if."

Do you think May should remain as leader or stand down and let someone else take over?

​May's performance at the conference may well be critical in ensuring her longevity — but history shows even a good closing speech cannot rescue a moribund leader.

Iain Duncan Smith, who led the Conservatives between September 2001 and November 2003 — and likewise called for his critics within the party to "put up or shut up" and "unite or die" — was unseated after a conference speech that was well received by attendees.

Over the course of the speech, Duncan Smith's oratory was attended by over a dozen standing ovations, and punctuated by applause lasting for an unprecedented eight minutes. However, a mere fortnight later, a no confidence vote was called — the "quiet man" lost by 90 votes to 75.

While in losing he became the first Conservative leader since Neville Chamberlain not to lead his party to victory in a general election, unlike May, he had at that point not lost an election, as May effectively did in June.

© AFP 2021 / Daniel Leal-Olivas
A placard showing a picture of Britain's Prime Minister Theresa May, saying "You can't trust her" is raised in front of the Elizabeth Tower, commonly referred to as Big Ben as protesters gather in Parliament Square after marching through central London on June 21, 2017.

Whatever May's post-conference state, bookmakers are already taking bets on the identity of the next Conservative leader — and David Davis, Secretary of State for Exiting the European Union, is the clear front-runner.

If Davis were to throw his hat in, it would not be for the first time. In 2005, he was likewise favorite in that year's leadership contest — as if from nowhere, then-Shadow Education Secretary, the largely unknown David Cameron, entered the race and quickly supplanted Davis as leader-in-waiting.

This time, if there is a this time, there could well be two other Old Etonians who could pose a threat to Davis' ambitions.

© AFP 2021 / Stefan Rousseau
British Foreign Secretary Boris Johnson (2R) sits next to British Prime Minister Theresa May (3R) during a meeting of the cabinet at the Prime Minister's country retreat Chequers near the village of Ellesborough in Buckinghamshire, northwest of London, on August 31, 2016.
Although Foreign Secretary Boris Johnson is on record as saying his chances of becoming prime minister were as good as "the chances of finding Elvis on Mars" or him being "reincarnated as an olive," he may well harbor aspirations in that direction — in the 2016 Conservative leadership election, announced in the wake of the Brexit referendum, he was widely regarded as a potential front-runner.

​In the event however, Johnson declined to run, believing he couldn't provide the necessary unity or leadership for the party, given his close association with the "leave" campaign.

Such connotations are likely to still prove ruinous, particularly as the government's approach to Brexit has been suggested to have contributed to the Conservatives' cataclysmic general election. Still, as Johnson himself once said, there are no disasters, only opportunities — "and indeed opportunities for fresh disasters."

The other former Etonian who could miraculously pose a threat is Jacob Rees-Mogg — a father of six who has never changed a nappy.

Thanks to @privateeyenews for some helpful suggestions for next time. pic.twitter.com/dkXbtZVCTR

While Rees-Mogg's pinstripe traditionalism has been the target of much ridicule on the internet and social media, betting markets place him second behind Davis, with a 12 percent chance of becoming next leader.

In a July 19 interview with party activity site Conservative Home, Rees-Mogg said he did not see himself as "a serious candidate" — although he regarded the prospect as "flattering" and did not explicitly rule out running.