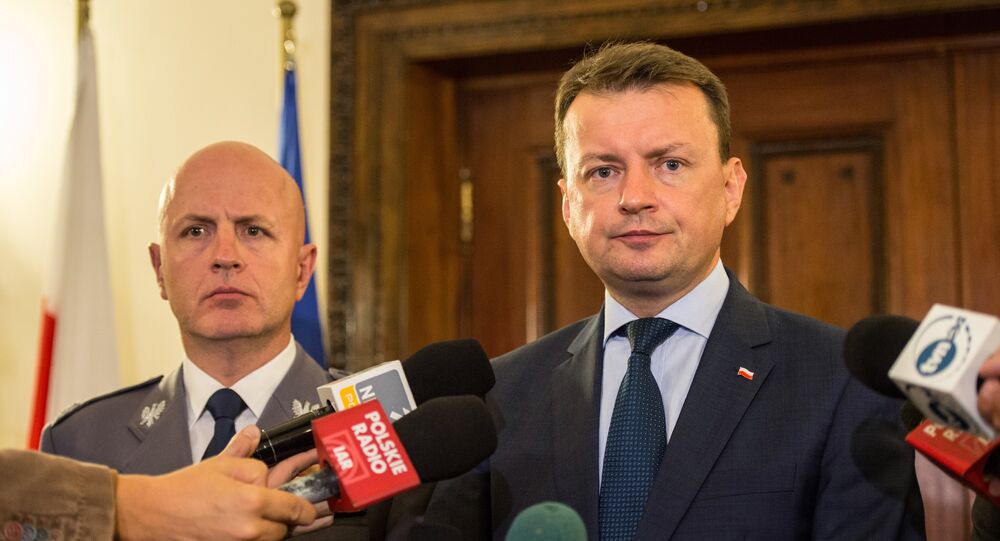 MOSCOW (Sputnik) — On Wednesday, Poland demanded the discontinuation of the European Commission’s infringement procedure, which was launched in June over the country's non-compliance with migrants relocation scheme, and warned that it was ready to defend its position in the European Court of Justice. In response, Brussels said that it would not halt the procedure.

"The European Commission failed to respond to numerous arguments put forward by Poland in its previous letters. This could indicate a dogmatic approach to the Commission’s previous position on, among others, the refugee relocation mechanism … The Commission did not take into account Poland’s arguments. The document indicated systemic weaknesses in the mechanism of implementing the decision on relocation," Blaszczak said in a statement.

© CC BY-SA 2.0 / mw238 / Presidential palace in Warsaw
Poland Likely to Evade EU Sanctions With Support of Hungary, UK, Czech Republic – Lawmaker
The Polish minister pointed out that EU measures made it impossible for the country to verify the credibility of migrant candidates.

"Paris, Stockholm, Brussels, Berlin, Manchester, Barcelona. How many more cities have to become a target of terrorist attack before the European Union will wake up? Before the European Commission will finally concede that admitting ‘blindly’ all of those who come to the European shores is putting a noose around the Europe’s neck," Blaszczak stressed.

According to Blaszczak, the national security policy is a matter for the country’s government only and does not fall under the Treaty on the Functioning of the European Union (TFEU). The policy can therefore not not be subject to an infringement procedure, the minister concluded.

"When people are arbitrarily relocated to a particular country, often against their will, it is probable that soon they will move to other Member States. This process is taking place even now, and applicants are treating the relocation process as a means to gaining international protection in order to reach a target country later on. This movement is caused by significant differences in the standard of living between particular Member States," Blaszczak added, referring to the tendency of migrants' settling in affluent European countries such as Denmark or Sweden.

In September 2015, the heads of the EU interior ministries adopted the European Commission’s proposal on the distribution of 160,000 undocumented migrants in Italy and Greece, across the European Union under a quota plan. The Czech Republic, Hungary and Poland have opposed the proposal. On June 14, the European Commission announced the launch of infringement procedures against the three aforementioned states.

'Revolt Against Brussels': Who Can Benefit From Putting Poland-EU Ties to Test