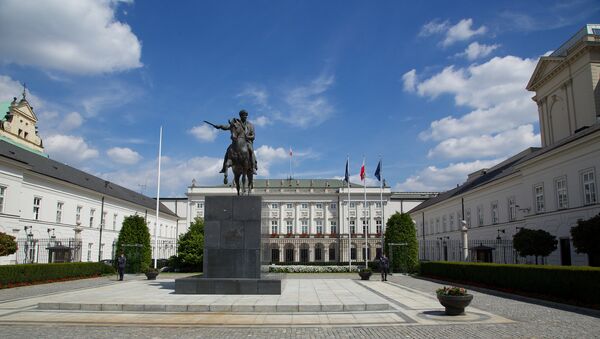 Possible EU sanctions against Poland over the latter's controversial judicial reforms are unlikely to be supported by Hungary, the United Kingdom and the Czech Republic as such restrictions could set a bad precedent, a member of Poland’s eurosceptic party Coalition for the Renewal of the Republic told Sputnik on Thursday.

EU Could Remove Voting Rights From Poland in Row Over Independent Judges
MOSCOW (Sputnik) — On Wednesday, the European Commission discussed judicial reforms in Poland in the course of a meeting in Brussels drawing a conclusion that these reforms would have a very negative impact on the judiciary and would threaten the rule of law in Poland. The EU Commission stated its readiness to revoke article 7 of the Lisbon Treaty that might suspend Poland's membership rights, such as voting in the Council of Europe.

"If it came to this, Poland would most likely have the support of many countries of the EU. They will vote against sanctions as it will set a precedent and no one wants to have such a precedent. I think Hungary, the UK and the Czech Republic will vote against the sanctions," Janusz Korwin-Mikke said.

He reminded that all EU member states should vote unanimously in order for the European Commission to impose sanctions on states accused of violating fundamental rights.

Both Hungary and the Czech Republic are also facing possible European Commission sanctions over their unwillingness to comply with EU migrant relocation quote. The United Kingdom is currently preparing to leave the European bloc in a bid to gain control over migration as well as bringing governing institutions closer to home.

EU Commission Not Concerned About Poland's Possible Loss of Membership
Korwin-Mikke criticized the Polish bill on the Supreme Court reform, saying that the country's ruling Law and Justice (PiS) party is trying to make sure that the "Justice Council will be full of judges that are sympathetic to the PiS."

Earlier on Thursday, the Polish Parliament adopted a bill which would change the system of appointing Supreme Court judges and allow for the dismissal of current judges, with the exception of those nominated by the justice minister.

On June 15, the Polish Senate also adopted two controversial bills, which now should be handed to the Polish President Andrzej Duda for signing. The first bill stipulates the amendments to the law on the National Council of the Judiciary, according to which the members of the council will be appointed by the parliament. The second bill will expand the powers of the justice minister, enabling the official to appoint or dismiss the chief judges of the lower courts.