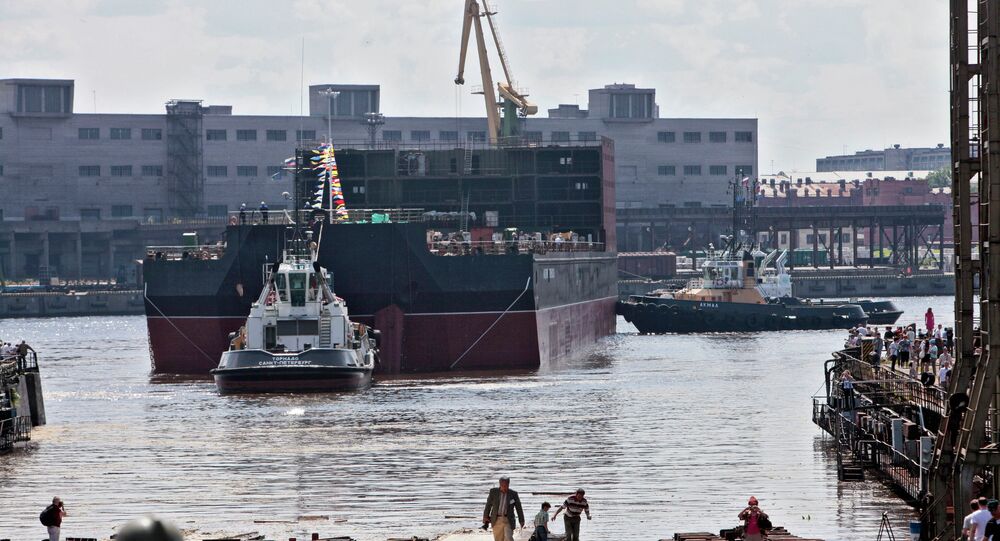 The world's first floating nuclear power plant, the Akademik Lomonosov, has terrified the Baltics and the Nordics before it has even been launched. Finland's Radiation and Nuclear Safety Authority (STUK) has effectively dispelled its neighbors' fears by assuring that the unique power unit bears no risks.

© Wikipedia
The Frog Prince: Russia Rolls Out a Red Carpet for Finnish Frogs
Previously, Russia's plans to transport the 144-meter-long Akademik Lomonosov from St. Petersburg, where it is being built, to the country's main Arctic port of Murmansk, have frightened the Baltics and the Nordics.

For Finland, however, which is Russia's close partner in both shipbuilding and nuclear energy, the Akademik Lomonosov is not a cause for concern, regardless of where Russia decides to test its new NPP. At present, the buyer, the supplier and the Russian authorities are still negotiating the location of the test. STUK's director Petteri Tiipana, who visited the shipyard in St. Petersburg earlier this week, ensured that the transportation of the power plant does not endanger Finns.

"Even if the reactor is transported along the Gulf of Finland, it would not pose any concern for Finns," Petteri Tiipana told Finnish national broadcaster Yle.

The Akademik Lomonosov project has been underway for a decade, and Tiippana visited it for the first time.

"It was nothing surprising. It looked like a typical power plant, with a lot of work going on," Tiipana said. "It is certainly a pilot facility for them [the Russians] too. After that, decisions will be made about the future," he added.

© AFP 2020 / PAAL AARSAETHER
More Powerful Icebreakers Needed in Baltic Sea Despite Global Warming
Exposure to rough sea conditions both during transport and mooring is a special challenge for floating power plants. According to Tiippana, though, infrastructure has been built on the shore to protect the power plant from the sea.

Earlier, Norwegian Foreign Minister Børge Brende expressed concern that a potential accident at sea could lead to radiation leaks, as the route through the Baltic Sea and the Kattegat Straight would bring the floating nuclear power station close to land, as would its voyage along Norway's long coastline.

Swedish Environment Minister Karolina Skog of the Green Party also expressed concerned about a "new type of risk" the floating NPP allegedly posed and assumed that Russia was doing everything to avoid an accident. Nevertheless, Greenpeace demanded that the project be stopped and called the government's action "extremely passive."

Patrik Oksanen of the Swedish newspaper Hela Hälsland went so far as to call the Akademik Lomonosov a "floating Chernobyl" and suggested that "virtually everything" could go wrong. He also ventured that the NPP could also become a target for terrorists during the towing process.

The Akademik Lomonosov is the first floating power unit of its kind. It is being built by Rosatom and is predicted to become the world's first serial floating nuclear power plant. It is being specifically designed for service in remote parts of the Arctic and the Far East, where it is particularly difficult to establish a power grid. Next year, the Akademik Lomonosov will be moved from St. Petersburg to Pevek on the Chukchi Peninsula.

In 2015, the construction of a second vessel starting in 2019 was announced by Russia's state nuclear corporation Rosatom. Other possible destinations include Dudinka on the Taymyr Peninsula and Vilyuchinsk on the Kamchatka Peninsula.

Should the project become commercially viable, exports may also become topical, as 15 nations including China have already shown interest.