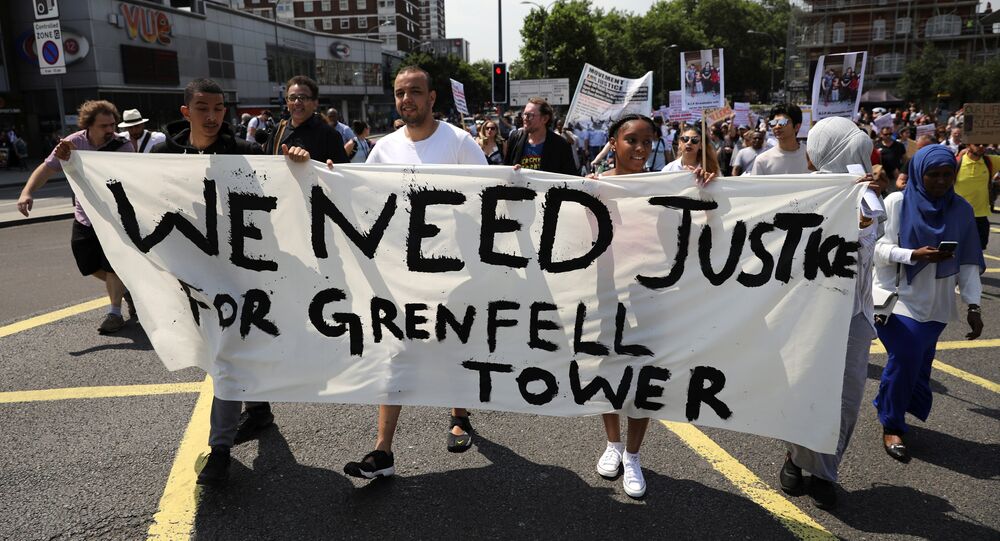 Hundreds of people were rallying in the UK capital of London to protest the lack of government response to the tragic fire in Grenfell tower apartment block, The Guardian reported.

MOSCOW (Sputnik) — The newspaper reported that the protesters, who marched from west London to Downing Street, were demanding permanent UK residency and full amnesty for those displaced residents without immigration papers, as well as local rehousing for all those who have been displaced.

© REUTERS / Marko Djurica
Axed & Slashed: UK Emergency Services Feel Immense Strain After Terror, Grenfell
The protest was organized by Movement for Justice By Any Means Necessary (MFJ), the newspaper continued. In the description of the march, as published by the MFJ on Facebook, the movement calls for the "destruction of [UK Prime Minister] May's coalition of austerity and bigotry" and for bringing down May's government.

The march was happening amid the ceremony of the State Opening of the UK parliament, during which UK Queen Elizabeth II delivered the Queen's Speech, which is written by the government and sets out the newly elected parliament's agenda.

On Wednesday, May apologized for the government's failure to handle the disaster and pledged that the families of victims would be paid legal costs for the damage caused by the fire. Aside from the prime minister's remarks, the UK government's Department for Communities and Local Government announced that the first tranche for the permanent housing of local residents affected by the fire at Grenfell Tower was secured.

A huge fire started on the 24-floor Grenfell tower, a high-rise apartment block in North Kensington, London, on June 14, engulfing the entire building and trapping almost 120 families inside. At least 79 people have been confirmed dead. North Kensington is known as an area densely-populated with immigrants, including, but not limited to, those from the African countries, Middle East, Eastern Europe and Asia.

© REUTERS / Marko Djurica
The Real Bridge Over Troubled Water: Local Church Calms Grenfell Tower Storm
May's government faced immediate criticism over the failure to immediately provide permanent re-housing and social benefits to the victims of the fire. Apart from this, the authorities were slammed for the lack of actions taken to prevent the deadly fire. Since 2013, the UK ministers for Housing and Planning, including Gavin Barwell, the newly appointed Downing Street’s chief of staff, had reportedly received reports containing evidence that high-rise blocks like the Grenfell Tower were vulnerable to fire.

On June 16, protesters rallied in London, demanding the release of all information regarding the number of the people who lived in the Grenfell Tower, as well as full transparency of the investigation and immediate allocation of financial aid to the victims. A demonstration against the way local authorities dealt with the implications of the Grenfell Tower fire also took place on Saturday.