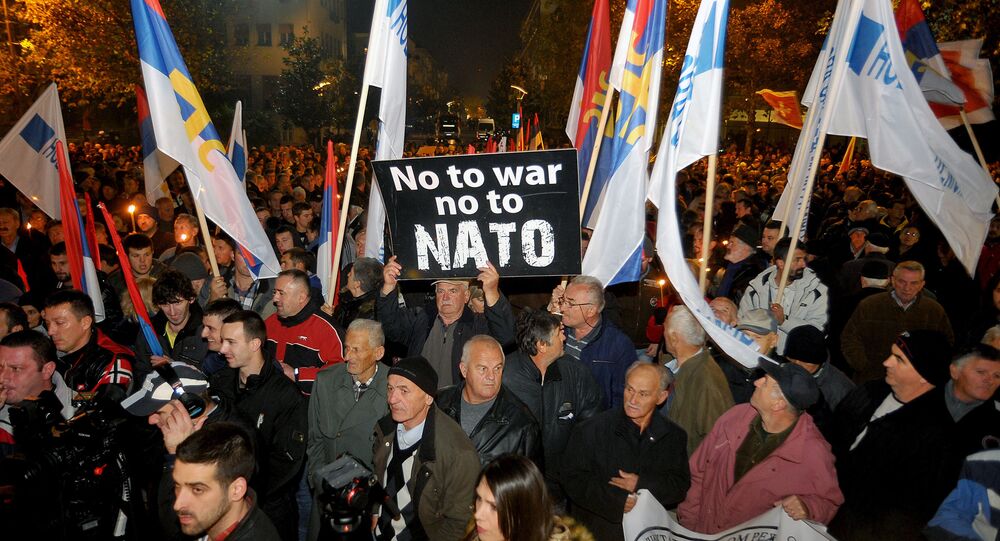 Insatiable: US and EU 'Hell-Bent' on Snapping Up the Balkans

Speaking to reporters after talks with his Slovakian colleague Miroslav Laicak, Russia’s Foreign Minister Sergei Lavrov complained about what he described as the US and the EU “hell-bent” on drawing the Balkan countries into their fold.

© AP Photo / Risto Bozovic
Montenegro's Accession to NATO is 'One of the Biggest Betrayals in History'
He added that Moscow has nothing against the Balkan states’ economic integration with the EU, but hoped that this single economic area would “spread to the rest of the Eurasian continent.”

Lavrov’s statement came amid complaints by Western politicians and their pro-Western colleagues in the Balkans about Russia’s alleged negative and even destructive impact on the region.

In an interview with Sputnik Serbia, Russia’s ambassador in Belgrade, Alexander Chepurin, dismissed all talk about Russian attempts to prevent the Balkan countries’ integration with the EU as “absolutely senseless.”

“I have said it once and again that Russia has never raised the issue of the European integration of the Balkans. Our position on this issue is absolutely neutral. All depends on the Balkan states’ desire to join the EU,” Chepurin said.

He added that Moscow was holding out for constructive and businesslike relations “with Europe, the Balkans, the whole world.”

“What we don’t like are calls to unite against Russia. This is a fatal policy, fatal for all of us,” the ambassador emphasized.

He complained about the mainstream media’s mainly negative and often slanderous coverage of Russia.

“Some people go as far as saying that Russia and Putin decide the outcome of elections in the West. This is not so.”

Chepurin said that this was done to justify the creation of coalitions against Russia and attempts to draw countries into NATO and other Western organizations instead of joining forces against terrorism and for sustainable economic growth.

“We need to turn Europe into a place we can cooperate in, not fight. Just leave Russia alone and stop hindering our cooperation with the Balkan countries,” Chepurin continued.

He pointed at Montenegro’s recent acceptance into NATO as a graphic example of cobbling together alliances against Russia.

© REUTERS / Ints Kalnins
NATO 'Wants to Use Montenegro to Militarize Balkans'
“Russia has never been a security threat to Montenegro, which has always been so close to us. Why didn’t they ask the people? Why didn’t they hold a nationwide referendum? […] The attempts to demonize Russia and Putin will continue, but I don’t think they will succeed,” Alexander Chepurin noted.

Belgrade University professor Dusan Prorokovic explained the Western concerns about Russia’s presence in the Balkans by the fact that the US and the EU are losing their clout in the region.

Dusan Prorokovic sees Lavrov’s words about the “Eurasian continent” as a sign of Russia willing to normalize its relations with the EU. He added that Eurasian integration remains a longtime Russian strategy and this is why, despite “the asymmetrical trade war with the European Union,” the idea of a single economic area stretching from Lisbon to Vladivostok hasn’t gone anywhere.

Dmitry Solonnikov, the director of the Institute of the Modern State in Moscow, said that the EU and the United States are implementing the longtime strategy of building up their economic and military presence in the Balkans.

“I see Montenegro’s accession to NATO primarily as part of Brussel’s PR campaign and an attempt to exert psychological pressure on the other Balkan states, above all Serbia and Macedonia,” Solonnikov said.

“They could use Montenegro’s accession to bring up once again the issue of Ukrainian and Georgian membership and eventually, also of that of Azerbaijan and Belarus,” Dmitry Solonnikov warned.

© AP Photo / NATO TV
How Montenegro Defense Cost Boost Over 2% GDP as NATO Member Will Affect Economy
On June 5 Montenegro officially became a NATO member, despite the fact that about half of the country’s population was opposed to this move.  The Russian Foreign Ministry criticized Montenegro for joining the alliance without holding a nationwide referendum.

Russia has repeatedly expressed concern over NATO's eastward expansion, saying that this process could undermine stability and security in the region and beyond.