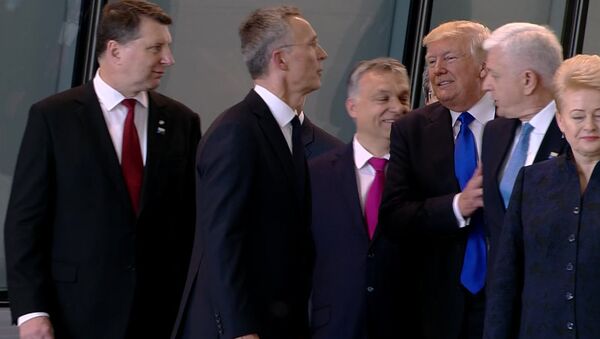 © AP Photo / NATO TV
Subscribe
Podgorica’s obligation to increase defense spending as part of NATO from 1.66 to 2 percent of GDP and higher will not burden Montenegro’s economy, Momcilo Radulovic, a member of Montenegro's negotiating working group on EU accession for Chapter 31 on foreign, security and defense policy, told Sputnik.

MOSCOW (Sputnik) — On Monday, Montenegro became the 29th full-fledged member of the alliance. Under NATO regulations, Montenegro is required to increase its defense spending to meet the 2-percent target of the country’s GDP, amounting to some 70 million euros ($78.5 million at the current exchange rate) in 2017.

"Montenegro is already spending 1.66% for defense costs. It has been planned anyway to increase these costs, so it will not be a burden for our economy to raise the defense costs even above 2%," Radulovic, who is also the president of the European Movement in Montenegro tasked by the country’s justice ministry to deal with projects of European integration, said.

The increase in defense costs, which comes on top of Montenegro’s annual fee to the NATO budget totaling 450,000 euros ($505,000), would even be beneficial for the country in the long-term outlook, he added.

"Predictions for our economy are pretty optimistic and this increase will not have any negative effects. In fact, NATO membership will help us to decrease defense costs in a longer period of time, since we will not have significant givings for heavy weapons like tanks, aircraft or bigger boats," the Montenegrin official said.

Lavrov: Montenegro's NATO Membership is 'Geopolitical Project at Its Finest'
On Wednesday, the International Monetary Fund concluded the economic outlook of Montenegro would be favorable in 2017, with GDP set to grow by about 3 percent.

According to Montenegrin opposition leader Milan Knezevic, defense costs will be the fifth expenditure item for the country's budget after expenses on the Ministry of Finance, Interior Ministry, Ministry of Labor and Ministry of Education, which may negatively affect the already unstable Montenegrin economy.

Montenegro accepted the invitation to join NATO on December 3, 2015. The government's decision triggered mass protests throughout the country. In May 2016, the alliance members signed a protocol on Montenegro's accession, which was later ratified by all NATO member states.