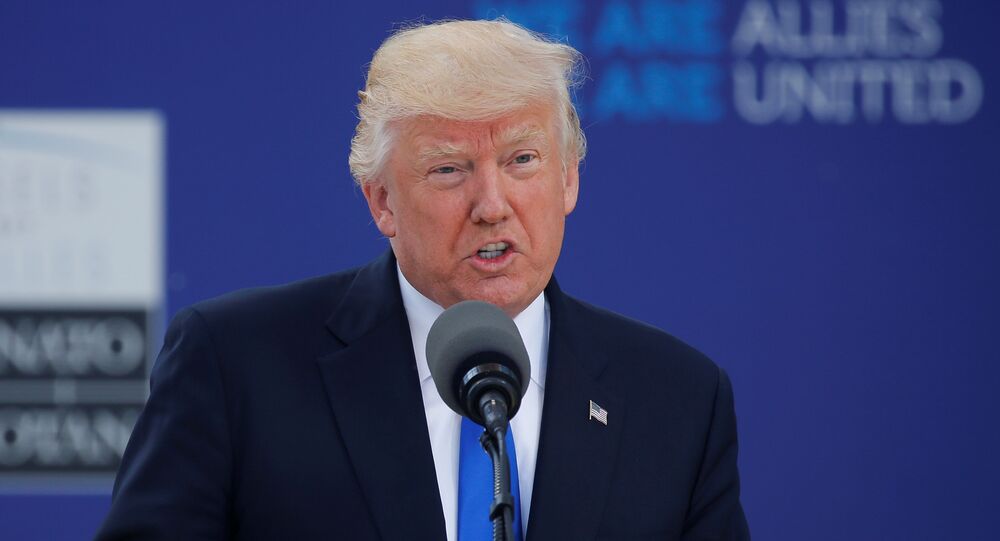 'Mincing No Words': Truth Behind Trump's Fall Out With Germany

During the recent NATO summit in Brussels, US President Donald Trump rattled EU leaders by declining to endorse NATO’s doctrine of collective defense in a blunt message about self-reliance to America’s allies in Europe.

© AP Photo / Pablo Martinez Monsivais
Trump: US Has 'Massive Trade Deficit With Germany', Berlin Pays Little on NATO
Trump used his speech at the NATO headquarters to publicly scold 23 NATO members, including Germany, for failing to meet their commitment to spend 2 percent of their GDP on defense.

He also fired an angry broadside against Germany, describing relations between the two longtime NATO allies as “very bad for the US.”

“We have a massive trade deficit with Germany, plus they pay far less than they should on NATO & military. Very bad for US. This will change,” Trump wrote on Twitter.

When meeting with fellow NATO leaders in Brussels, Trump complained about Germans as being “bad, very bad.”

His top aide, Gary Cohn later had to explain that his boss had in mind trade relations, nothing else. However, according to NATO Secretary General Jens Stoltenberg, Donald Trump had “openly and unequivocally” demanded that America’s NATO allies in Europe ramp up their defense spending.

As a result, they were forced to back off and pledge to spend no less than 2 percent of their GDPs on common defense.

German Chancellor Angela Merkel, once President Obama’s staunchest ally in Europe, has been equally unenthusiastic about the man who is now running the show in the United States.

"The times in which we could fully rely on others are partly over. I have experienced this in the last few days. We Europeans really have to take our destiny into our own hands," Merkel said during a May 28 campaign event.

The White House press secretary Sean Spicer later tried to right the wrong by describing the relationship between Trump and Merkel as “absolutely fantastic.”

“They get along well with each other, [Trump] respects her,” Spicer told reporters.

This was apparently not enough to restore close contacts between Washington and Berlin though, with German Foreign Minister Sigmar Gabriel criticizing Trump’s policy as “shortsighted.”

© REUTERS / Matt Dunham/Pool
NATO Summit in Brussels: Trump Shows 'Who the Boss is in the Alliance'
“The US government’s shortsighted policy is a variance with the interests of the European Union. The West has become smaller, to say the least,” Gabriel added.

“The new US President’s policies hinge not on international cooperation, but on isolationism and the presumed right of the strongest,” Schulz said.

He added that Europeans find it hard to understand Trump’s logic and should not give up on the idea of a just and fair globalization.

He also urged the EU leaders to stand up for the Paris Agreement on climate change, which Donald Trump could also forsake.

In Moscow, political analyst Alexander Asafov believes that the current cool in EU-US relations is just for show and that the German politicians’ statements are meant for domestic consumption only.

“All the German political leaders are saying should be viewed in the context of the upcoming elections. They want to show the voters that they decide for themselves whether to stay in NATO or not,” Asafov told RT.

He added that Donald Trump’s straightforwardness actually plays into the hands of Angela Merkel and her government.

“Trump minces no words saying what he wants. America is his main concern and all the rest have to toe his line. Merkel knows full well what her voters want to hear, but the existing agreements [whereby Europe plays the second fiddle to the US] haven’t gone anywhere.

© Sputnik / Denis Bolotski
Cold Welcome for Donald Trump in Brussels Ahead of NATO Summit
The most recent German proposal of an EU army has vanished without a trace,” Asafov concluded.

The issue of the contributions to NATO has been raised repeatedly by the new US administration, insisting on all countries honoring their NATO budget responsibilities.

The target of spending 2 percent of GDP mandated by NATO was adopted at the alliance's September 2014 summit in Wales, with only five countries, including the United States, meeting the required standard, according to NATO figures.

NATO Summit in Brussels: Trump Shows 'Who the Boss is in the Alliance'