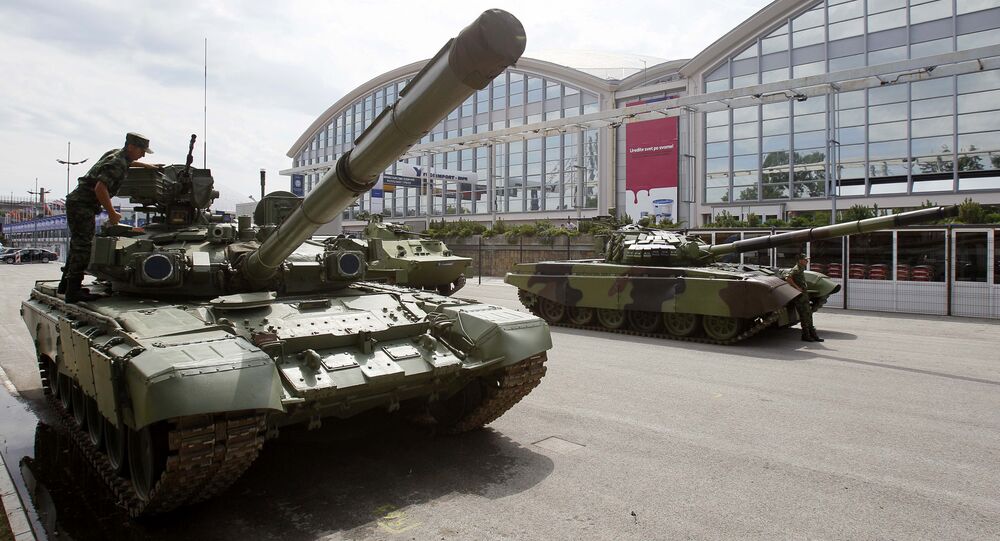 Eight hundred new jobs will be available in Serbia’s defense industry this year and two helicopter repair centers will open in the next as the country builds up its military potential, according to Serbian Defense Minister Zoran Djordjevic, who is taking part in an international security conference now underway in Moscow.

© Sputnik / Evgeny Biyatov
'Logical Cooperation': Serbia to Join Russia-Led Defense Bloc in Simulated War With NATO
Interviewed by Sputnik Serbia on the sidelines on the MCIS-2017 conference, Zoran Djordjevic said that amid the current economic upswing the Serbian government had earmarked 45 million euros toward the implementation of a raft of defense projects.

He added that one of the two helicopter service and repair centers would deal with Russian helicopters, while the other would tend to Airbus rotorcraft.

“We want to become a regional service center for Airbus helicopters. The X-145 medium-range helicopter is very good and we are sure that it will be selling well both in Serbia and elsewhere in the Balkans,” Djordjevic said.

With the Serbian government all set to make the defense industry a key economic sector, Sputnik asked the Minister whether Belgrade would be doing this alone or in cooperation with other countries, including Russia.

Zoran Djordjevic said that Serbia wanted to go it alone and was unlikely to team up with anyone else just for the sake of it. He also underscored the importance of defense production for the army and the national economy as a whole.

“Our parliament is now working in a draft law on the production and transportation of arms and ammunition which, if enacted, would allow foreign ownership of maximum 49 percent of Serbian property,” the Minister said.

© Sputnik / Alexei Druzhinin
Russia, Serbia Confirm Interest in Developing Military Cooperation - Shoigu
“There is a great deal of foreign interest in investing in Serbia. We’ll figure out where it would be best for us and our foreign partners to invest. This would facilitate defense production and make it cheaper too. In some cases we would be ready to engage in joint production and possibly to launch a number of joint ventures,” he added.

When asked if Serbia has enough specialists available to implement these ambitious projects, Zoran Djordjevic said that this year they planned to create 800 new jobs in the defense sector and one of the two helicopter repair centers was slated to go online on January 1, 2018.

“We have helicopters and we have people who can fly them. Moreover there is a number of MiG-29s [fighter jets] we are going to get from Russia, so we need people to service them,” Djordjevic noted.

Serbia is expected to take delivery of a number of MiG-29 fighter planes, as well as tanks and scout vehicles.

An agreement for the free delivery of six MiG-29 jets, 30 T-72 tanks, and 30 BRDM-2 armored vehicles was reached during Serbian Prime Minister Aleksandar Vucic’s visit to Moscow in December, 2016.