Fresh calls for a Greater Albania, incorporating the southern Serbian province of Kosovo, have led to an angry backlash from politicians in Belgrade. Sputnik Radio's Mark Hirst talked to Marko Djuric, Director of the Government Office for Kosovo and Metohija.

Such a move by Albania, if acted upon, could plunge the entire region back into a bloody and costly war on a scale not seen since the 1990s.

© Sputnik / Iliya Pitalev
'Greater Albania' Initiative Can Trigger Great Balkan War - Serbian Minister
Marko Djuric said that Serbia will not allow the creation of a Greater Albania in its southern province and that it is not alone in opposing the idea, which stems from the times of Nazi occupation of Yugoslavia.

When asked whether this inflammatory statement by Albanian Prime Minister Edi Rama was a tactical move, rather than a serious claim, Djuric said that if it was actually translated into concrete action, then it would be a blatant violation of international law.

“For us and for a large part of the international community, including the UN, Kosovo and Metohija are an integral part of Serbia. There was no kind of a democratic procedure in Kosovo’s secession from Serbia,” he emphasized.

Meanwhile, the EU, a body to which both Serbia and Albania eventually hope to join, remains silent over the Albanian prime minister’s controversial comments.

“Unfortunately, we saw silence when Pristina decided to stop the dialogue, and we don’t see a sufficient EU reaction to these claims. During the past years the Pristina authorities have failed to bring about any economic growth in the region where the unemployment rate is 65 percent and 45 percent of ethnic Albanians live below the poverty line even though the EU has invested over 60 billion euros into our southern province,” Marko Djuric continued.

He added that the local Serbs, who have suffered numerous pogroms in the past 20 years, were “terrified” by the prospect of being “swallowed” into “Greater Albania.”

“We should also bear in mind the fact that two-thirds of Kosovo’s pre-war Serbian population remain refugees and only about 120,000 still live in Kosovo and Metohija in poor economic conditions and political isolation, while over 200,000 now live in central Serbia,” Djuric pointed out.

He added that the EU was doing nothing to help the Serbs to return to Kosovo.

“The return of Serbs who were expelled from Kosovo has been an utter failure by the international community. The rate of their return is the lowest in any post-conflict zones in modern history, even lower than in Rwanda and Burundi.”

Marko Djuric added that whatever assistance the returnees get comes from Serbia, which pays monthly allowances to those who want to return.

“What we can’t provide without the assistance of the international community, however, is a political climate and access to property.

Over 80,000 houses and apartments in Kosovo are now used by other people and, together with security problems, these are the biggest obstacles preventing the Serbs’ return to Kosovo,” Marko Djuric said.

Earlier in the week, Albanian Prime Minister Edi Rama made a statement that Albania and the partially recognized republic of Kosovo, also inhabited by Albanians, could reach a “union.” 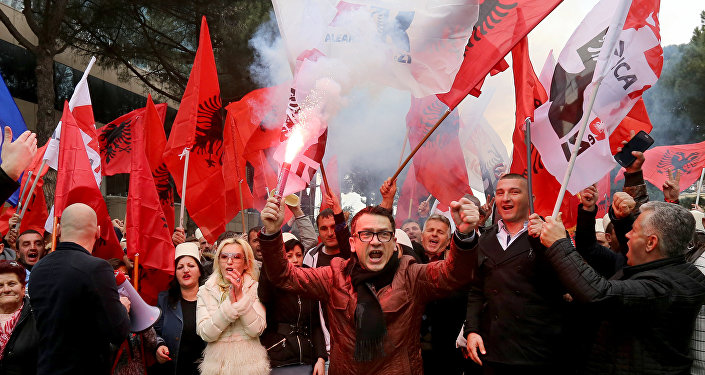 © AFP 2019 / GENT SHKULLAKU
Unit of Threat: Albania Blackmails EU, Threatens to Unite With Kosovo
The Albanians are one of the Balkan peoples constituting the majority of population in Albania. However, significant numbers of Albanians live in the territories of former Yugoslavia, neighboring Albania itself, such as Kosovo and Montenegro.

A number of politicians, such as Rama, have voiced the idea of a Greater Albania in order to unify all the territories inhabited by the Albanians within a single state.