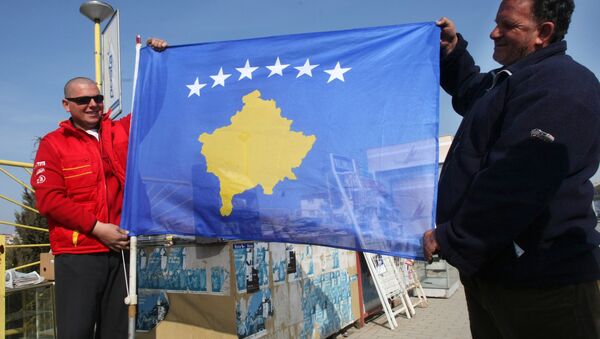 The implementation of the so-called Greater Albania initiative designating the unification of lands inhabited by Albanians would result in a sizable war in the Balkan Peninsula, Serbia's Minister of Labor, Employment, Veteran and Social Policy Aleksandar Vulin said Thursday.

MOSCOW (Sputnik) — Earlier in the week, Albanian Prime Minister Edi Rama made a statement that Albania and the self-proclaimed republic of Kosovo, also inhabited by Albanians, could reach a "union." Soon afterward, President of Kosovo Hashim Thaci said that if Brussels "closed [the] door on Kosovo," all Albanians in the region would unite into one state.

"Pristina and Tirana have clearly said what their goal is, it is a 'Greater Albania' and unification of all Albanians, regardless of where they live, into a single ethnic area. That can only be accomplished through a great Balkan war, and Brussels must be clear on all this," Vulin said, as quoted by the B92 media outlet.

Unit of Threat: Albania Blackmails EU, Threatens Unification With Kosovo
He added that if the European Union did not at least condemn the statements of the Albanian politicians, Brussels would be responsible for possible escalations in the region, as the Albanians could come to understand that their statements would go "unpunished."

The Albanians are one of the Balkan nations constituting majority of population in Albania and Kosovo, and represent significant minorities in neighboring countries such as Serbia, Macedonia and Montenegro. The Greater Albania concept means unification of all Albanians to one state.