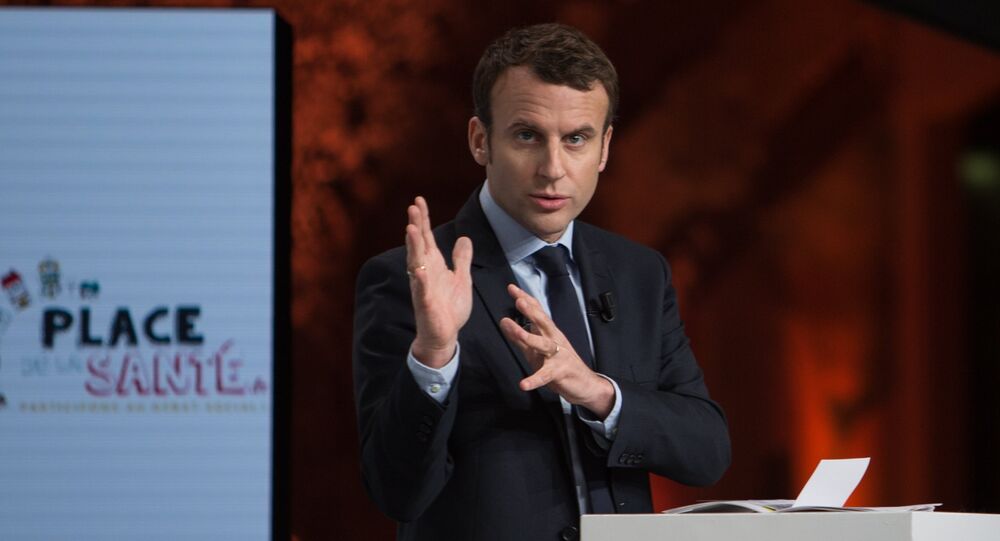 Macron's Presidential Pledge: I Can Manage to Get Putin's Respect

With less than a week left before France's presidential elections, the country's relationship with Russia remains one of the hottest topics of the campaigns of the presidential nominees. Yet another candidate, Emmanuel Macron, has decided to play the "Russian card," pledging that he will "be able to make himself respected by Vladimir Putin."

© Sputnik /
'Hand of the Kremlin'? Out of 11 French Presidential Candidates, 7 'Pro-Putin'
One week before the French presidential elections, French presidential candidate Emmanuel Macron, the leader of the En Marche! (Forward) movement, which he defines as "neither left nor right" decided to play the "Russian card" once again, this time pledging that he will "be able to make himself respected by Vladimir Putin."

In an interview with Jeune Afrique, a French-language Pan-African weekly news magazine, the presidential contender said that "unlike others, he is able to make himself respected by Vladimir Putin because he has no debt to Russia."

"I will say to Vladimir Putin in a very direct and determined way that I am ready to revive a demanding dialogue to resolve the crises in which Russia is involved (Ukraine, Syria). I will also tell him that I will be vigilant in defending our principles, without hostility but without concession," he told the outlet.

The comment came after another French outlet, the newspaper L’Express, published an article titled "Presidential election: 11 candidates, 7 pro-Putin." Notably, Macron was not mentioned among the "pro-Putin" presidential nominees.

"Unlike others, I am in a position to be respected because I have no debt to Russia in this campaign where unacceptable interference took place," Macron told Jeune Afrique.

© Sputnik / Irina Kalashnikova
Macron: France Must Maintain Dialogue With Russia
"Russia has a great people, a great culture and a great history. We have often been allies, including during the time of the USSR. But today there is no reason to submit to any Russian domination, to be impressed or to let the Russians act in defiance of international law," he said.

"If Russia meets its commitments, then we will gradually lift European sanctions and, in conjunction with Germany, we will strengthen the political and economic partnership of the EU with Russia," the candidate added.

Earlier in April, Macron however claimed that it is crucial for Paris to maintain a political dialogue with Moscow, but that the French government should not support every stance of the Russian political leadership.

“We should maintain a dialogue with [Russian President] Vladimir Putin, but under no circumstances should we indulge what he sometimes supports or defends … Russia needs to be put face to face with its responsibilities,” Macron then told the broadcaster BFMTV.

According to Macron, all of his rivals in the French elections are “charmed by Vladimir Putin.”
The first round of the French presidential elections will take place on April 23, while the run-off between the top two contenders is scheduled for May 7.

According to a fresh Harris Interactive poll, the top two contenders are likely to be Macron and far-right National Front party nominee Marine Le Pen, who are projected to receive 23 percent of the vote each. The candidates of France's Republicans and Socialist Party, Fillon and Mélenchon, are expected to gain 20 and 19 percent, respectively.