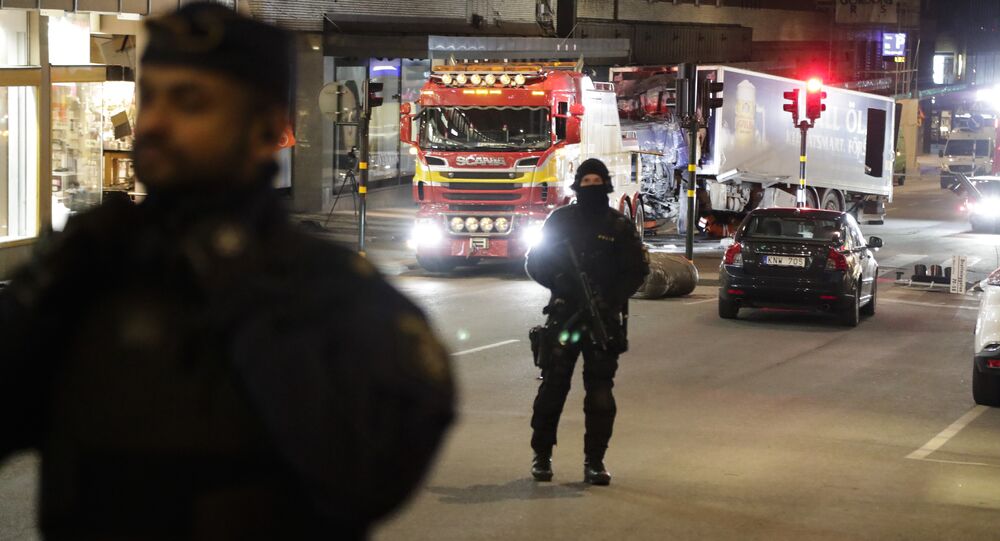 The deadly recent truck attack in Stockholm has left Sweden in shock and prompted politicians and pundits to ponder ways of possibly putting an end to such attacks altogether. Several Swedish experts believe that it is high time Sweden learned from Israel's experience in combatting terrorism.

© AFP 2021 / Jonathan NACKSTRAND
Troublesome Trucks: Nordics Ponder How to Prevent Vehicular Terrorism
According to Anders Persson, a political scientist and Middle East researcher at Lund University, it's crucial that Prime Minister Stefan Löfven sees the truck attack into the context of radical Islamist terrorism rather than simply "violent extremism," which is the preferred nomenclature nowadays. If it's able to do so, Sweden may be able to copy Israel's experience in fighting Islamic terrorism.

"Many Western countries, including Sweden, often criticize Israel openly, while they at the same time are secretly eager to learn how the country has fought Islamic terrorism and other security threats" Anders Persson wrote in his opinion piece in the Swedish daily Svenska Dagbladet. He ventured that Sweden has much to learn from Israel's ability to tackle the latest cycle of violence, which is often called "popular terrorism."

According to the analyst, modern terrorism research distinguishes between four and possibly five waves of terrorism. These include the anarchist wave, which lasted from the 1800s well into the 1900s, the nationalist wave after World War II, the leftist wave in the 1970s, the religious wave after 1979, and, possibly, a right-wing wave from the 1990s onwards. The religious wave remains the most dominant today and is largely associated with Islamist extremism. Israeli research showed that 450 of a total 452 suicide attacks around the world were performed by militant Islamists. A similar pattern emerged in 2016, Persson noted.

© Photo : Pixabay
Norway Against 'Israeli Way': Open Society More Important Than Combating Terror
Israel has been one the key targets of Islamist terrorism for decades. In the 1980s, groups employing terror-like tactics mushroomed across the Muslim world. Most of the maneuvers employed today, such as suicide bombings, car bombs and self-made bombs were pioneered in strikesagainst Israel, which for decades experienced attacks on civilians in urban environments similar to those seen in Stockholm, Berlin and Nice.

Unlike their predecessors, "popular terrorists" are not necessarily linked to established organizations, but rather act on their own, inspired by the current events and activity in the social media. Most often than not, they have no formal terrorist training and instead use every means available, from home-made weapons and their own vehicles to kitchen knives and screwdrivers. Often, they are residents of the communities they choose to attack.

According to Persson, the man who acknowledged having deliberately mowed down people in Stockholm perfectly fits the profile of a "popular terrorist." The only question left to answer is how many people there are like him in today's Sweden, Persson noted.

© REUTERS / Fredrik Varfjell/NTB Scanpix
Violent Islamism 'Likely' to Sweep Through Norway, Europe due to Poverty, Crime
One of the biggest problems with contemporary Islamist terrorism is that its ideological framework allows angry people to vent their personal despair in a violent way, Persson wrote. According to him, some of the attackers in the recent cyle of violence that engulfed Israel resorted to terrorism to escape personal problems in order to die as what they perceived to be honorable martys

"It would be a nightmare scenario for Sweden if angry and alienated young men (and to some extent even women) would choose to channel their frustration through 'popular terrorism,' which Israel has witnessed in the past 18 months," Persson wrote, venturing that Prime Minister Stefan Löfven in 2015 delivered a "world-class" gaffe when he refused to acknowledge the wave of attacks against Israel as terrorism.

Similar ideas were presented by the leader of the Civic Coalition, Ilan Sadé, who believes that it is high time to shed naivety when it comes to terrorism. In his opinion piece in Nyheter Idag, Sadé, who holds Swedish and Israeli citizenship, argued that Israel has had a long history of handling terrorist attacks, which is worthy of attention.

"There are probably several reasons why the 90s and 00s bombings have not taken place for a long time. An important part of the explanation is a functional border. You know, a wall, whose very idea Sweden has banned as an expression of primitive instincts," Ilan Sadé wrote, stressing the need for "awakening" in the Nordic country that has long been characterized by the absence of politically and religiously motivated violence.