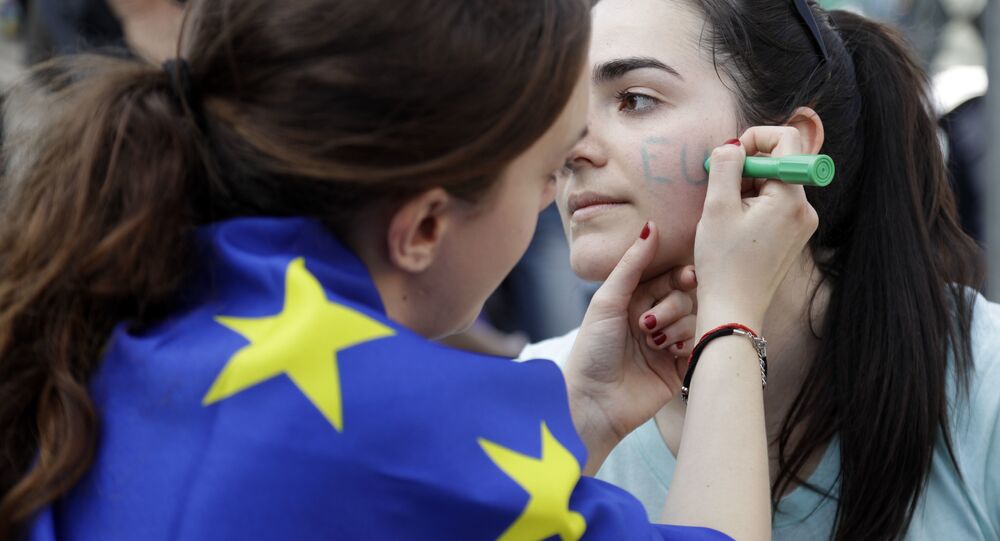 © AP Photo / Petr David Josek
Splitting Scenarios: Europeans Plan for Fallout From Potential Collapse of EU
In an interview with Sputnik, former Czech MP Jiri Vyvadil dismissed the EU's attempt at a summit in Rome to present a united front among its post-Brexit members, saying it revealed the "political impotence of the EU leadership."

The interview came about a week after a new declaration was agreed upon honoring the 1957 Treaty of Rome, which established the European Economic Community and led to the EU's foundation. The document was signed by 27 EU member states (the UK abstained) during a celebratory summit in the Italian capital.

Despite optimistic remarks by European Commission President  Jean-Claude Juncker about the future of the EU, German Chancellor Angela Merkel, for her part, admitted in an interview with the Italian news network Rai ahead of the summit that the EU "did not do everything well" in its migration and economic policy and that some relevant issues have yet to be resolved.

© REUTERS / Tony Gentile
European Union leaders pose for a family photo during a meeting on the 60th anniversary of the Treaty of Rome, in Rome, Italy March 25, 2017

Commenting on the summit's results, Jiri Vyvadil, for his part, said that the EU continues "to hang about" and that the Rome gathering brought nothing new, "once again discovering the indecisiveness of the Brussels democracy, [which is] incapable of creative ideas."

"During the summit, we heard nothing except the same lip-service to unity and 'even more Europe' from the leaders of 27 EU countries," he said, adding that "one could only smile at the artificial atmosphere of unity at the Rome gathering."

Asked about how he sees the future of a united Europe after the Rome summit, Vyvadil said that "the European Union, of course, will not disappear and will not disintegrate" in the immediate future.

"[At the same time], if Marine Le Pen wins in France's upcoming presidential elections, the EU will be doomed to break up," he warned.

He predicted that in the future, "every EU country and every regional association will show more drive to uphold its own interests within the framework of the EU."

"Some will follow the path of closer integration, while others, including Hungary, Poland and, perhaps, the Czech Republic, will remain more isolated.The vector of their policy will slightly shift to the east and I do not exclude that someone of them will leave the European Union," Vyvadil said.

He also remained downbeat about Brussels' ability to implement a spate of EU reforms aimed at resolving the problem of migrants, security and product quality control, among other things.

The EU has never been more divided than it is now, we must make sure it crumbles so Europe can recover https://t.co/ksAiNaZuz4

"Actually, the Rome summit revealed the political impotence of the EU leadership. The European project, which was optimistically perceived by people 30 years ago, finally turned into the boring repetition of the 'unity' slogans while maintaining the 'status quo'," he pointed out.

He concluded by saying that he personally hadn't expected breakthrough agreements to emerge from the Rome summit, where "we did not hear a single word that would inspire hope for the renewal and correction of the European Union."

Earlier, Italian political analyst Raffaele Marchetti told Sputnik Italy that "the lack of full integration related, for example, to the issue of the migration crisis, has become one of the EU's flops."

© CC0
'Two-Speed Europe': The End of the European Dream?
According to him, "a unified system for managing migration flows and the distribution of migrants was not developed" within the EU.

The Treaty of Rome marked the start of the whole EU project as it is today. Signed on March 25, 1957 by Belgium, France, Italy, Luxembourg, the Netherlands and West Germany, it established the European Economic Community.

'It's Up to Them': Amid 'Two-Speed Europe' Talk, China Pledges Support for EU