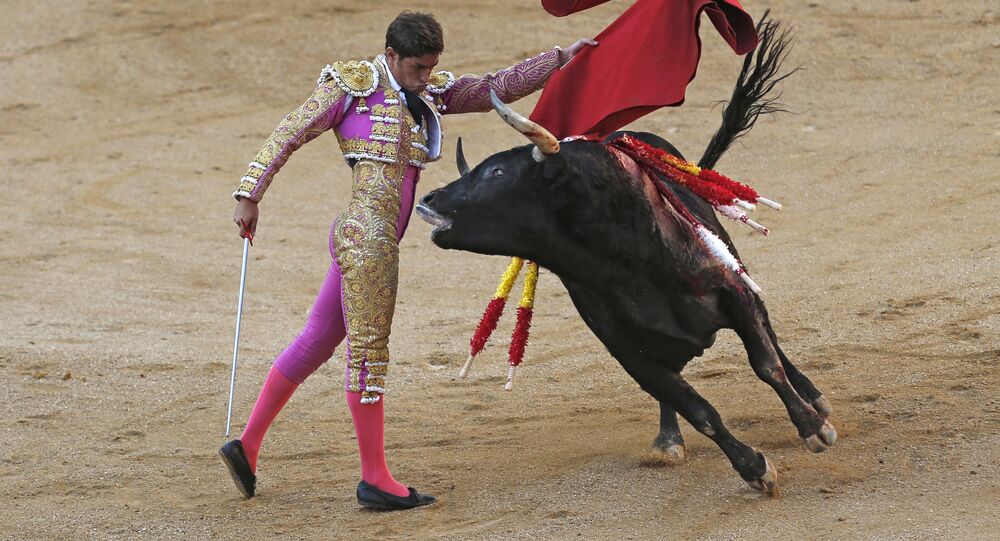 On March 28, the Scottish parliament voted in favor of a second independence referendum. Moving forward, Holyrood and Westminster are both likely to be keenly following developments in Spain, specifically Catalonia, where a regional separatist movement wants to be out of the country, but remain in the EU.

On March 14, when asked for the Spanish government's take on a second Scottish independence referendum, Spanish Foreign Minister Alfonso Dastis said Spain "doesn't encourage secessions or divisions… we prefer things continue the way they are."

Some may wonder why a Spanish politician was canvassed for opinion on the matter, but Madrid's sentiments are of critical importance to the Scottish independence cause — after all, Spain's government is battling a separatist movement within the country's own borders, the independence aspirations of which it wishes to neuter.

© AP Photo / Manu Fernandez
A "estelada" or pro independence flag and a European Union flag are waved in front of the President of Democratic Convergence of Catalonia Artur Mas, center in front of supporters in Barcelona, Spain, Sunday Sept. 27, 2015

Madrid's long running dispute with Catalonian separatists has led the country to consistently refuse to recognize Kosovo as an independent republic since its 2008 declaration of independence from Serbia. Kosovo, like Catalonia — and Scotland — wishes to be an EU member state, and one separatist cause being successful in this regard could serve as a blueprint for others. In turn, the Spanish government wishes to make clear separate deals or full membership aren't necessarily on the table for regions that secede from their parent nations.

The issue of Catalonian independence has significantly intensified since the start of 2016 — the region's parliament passed a resolution on holding an independence referendum in 2017, which was subsequently blocked by Spain's Constitutional Court, although secessionists have pledged to ignore the decision and carry on campaigning regardless, even if a plebiscite on the question is effectively illegal.

Ergo, it's perhaps safe to assume Spain's hardline stance on secession has also become more entrenched — and the Scottish National Party's dreams of an independent Scotland being able to remain in the EU, or being reflexively readmitted to the bloc, cannot be realized.

Professor Carlos Flores Juberias, Professor of Constitutional Law at the University of Valencia, says that while that diagnosis is largely correct, the situation is also highly nuanced.

"In short, is Spain happy about the prospect of an independent Scotland? No. Will Scotland be permitted to stay in the EU, or automatically have a relationship with the EU? I'm not optimistic. Still, Madrid's stance is not nearly as inflexible as some might think, or wish — they certainly aren't saying Scotland would never be allowed to return to the EU, or they wouldn't recognize Scotland as an independent country," Professor Flores Juberias told Sputnik.

The Professor explains Scotland would need to apply for EU membership on its own merits — meeting relevant standards, joining the queue behind other hopefuls and eventually negotiating with the EU. What those negotiations would produce — Scotland as a full member state, with a European Economic Area relationship, or even a unique deal — is uncertain.

Nonetheless, Professor Flores Juberias is certain that if Scotland does go independent, it could be decades before the country enjoys a relationship with the EU again, and the Spanish government will be instrumental in ensuring this.

"One particular negative motivating factor is if Scotland goes independent, it will be after a second referendum on the issue. [Mariano] Rajoy's government doesn't want to suggest to the Catalonian separatists that they can keep holding referendums until they get the "right" answer. I broadly agree with that principle — a referendum cannot be repeated purely because circumstances change. In politics, circumstances change all the time. If the Scottish independence movement had won in 2014, they'd consider the matter closed, and oppose attempts to hold another," he continued.

© AFP 2021 / Andy Buchanan
Pro-independence supporters console one another in George Square in Glasgow, Scotland, on September 19, 2014, following a defeat in the referendum on Scottish independence.

However, Professor Flores Juberias is even more certain that Catalonian separatists' aspirations will come to nought — for the time being, at least.

"The campaign has turned vicious. There have been violent clashes, and the People Party's headquarters was attacked. This is a sign the campaign is losing momentum — they're not able to put forward a peaceful, positive vision believed by voters, so they're resorting to aggression. Voters in almost every group, whether they strongly oppose independence, are open on the issue or enthusiastic about secession, are concluding pro-independence politicians cannot deliver on their promises," Professor Flores Juberias concluded.