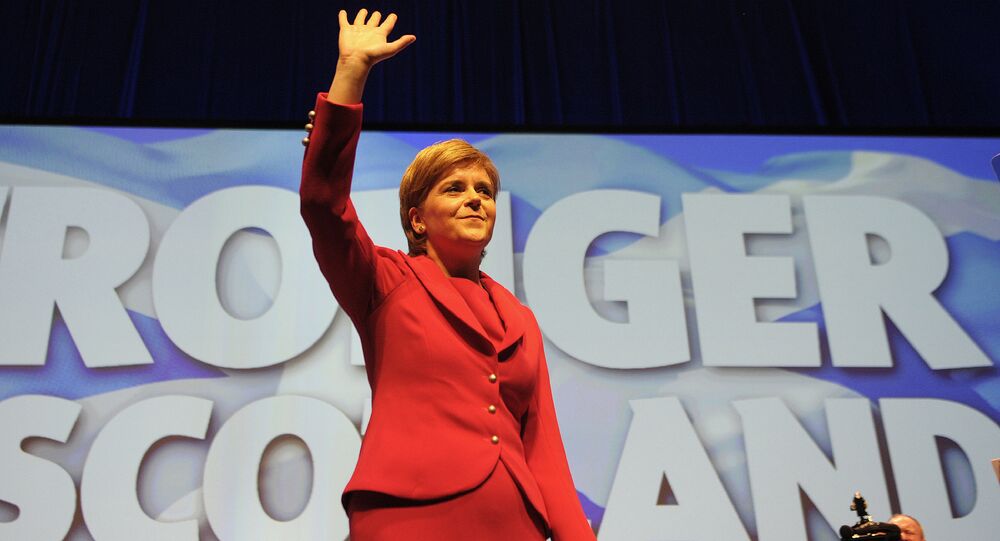 The Scottish National Party's (SNP) Brexit proposals, which envisage Scotland remaining in the single market, will be used by the European Union to "punch" the UK in negotiations, a Danish MEP has suggested - and a Scottish Conservative whip has told Sputnik the SNP's "ill-thought out" ideas prove Scotland can't remain part of the single market.

© REUTERS / Russell Cheyne
Scottish First Minister Determined That Scotland Remains in EU Single Market
Anders Vistisen, a Danish People's Party MEP, is reported to have said the proposals were  "unworkable," as they would be reflexively blocked by member states such as Spain, in order to suppress the independence aspirations of their own separatist movements.

Moreover, Vistisen believes the proposals will be exploited by the EU to weaken the UK's position in negotiations, and punish Britain for seceding.

He recalled Denmark's own experience of securing opt-outs in EU policy areas such as the euro, home affairs and justice, which he said were only attainable because Danish politicians presented a cohesive front on the issues.

There is no debate — at the moment it — #SNP & #Tories dialogue on #Brexit look like two drunk people trying to snog. https://t.co/rnHrokQt3N

​The MEP was particularly skeptical of the paper's claim that Scotland could join the European Free Trade Association and/or European Economic Area as a means of gaining full access to the single market.

The paper uses the example of the Faroe Islands, a Danish archipelago, as a blueprint for achieving such a relationship — Vistisen responded that the Faroe Islands have a population of less than 50,000 and are treated as an "overseas territory" by the EU, whereas Scotland's population of more than five million makes it larger than some existing member states. He also noted Denmark is a member of the single market, whereas the UK will not be if and when it leaves.

As a result, he believes the blueprint is not a "realistic solution," and in any event, having different business and immigration regimes would necessitate the erection of a physical border erected  between England and Scotland.

​The report's invocation of the Faroese model was also criticized for failing to mention how long it has taken for the Islands to secure effective membership. The 62-page paper failed to mention the archipelago first applied to join EFTA in 2006, and is still not a member as of December 2016.

"Rather than prove Scotland could join the EFTA, the example the Faroe Islands shows the exact opposite. They have been waiting for more than a decade for approval and have got nowhere, yet the SNP think Scotland should follow the same path," Scottish Conservative chief whip John Lamont told Sputnik.

"If the SNP really want the best deal for Scotland they need to work with other parts of the UK, not put forward ill-thought out plans such as this."

Prior to the publication of the proposals, Dr. Peter Lynch, a lecturer in history and politics at Stirling University, told Sputnik the UK leaving the EU was "hugely problematic" for the SNP, although it created an opportunity for a second independence referendum.