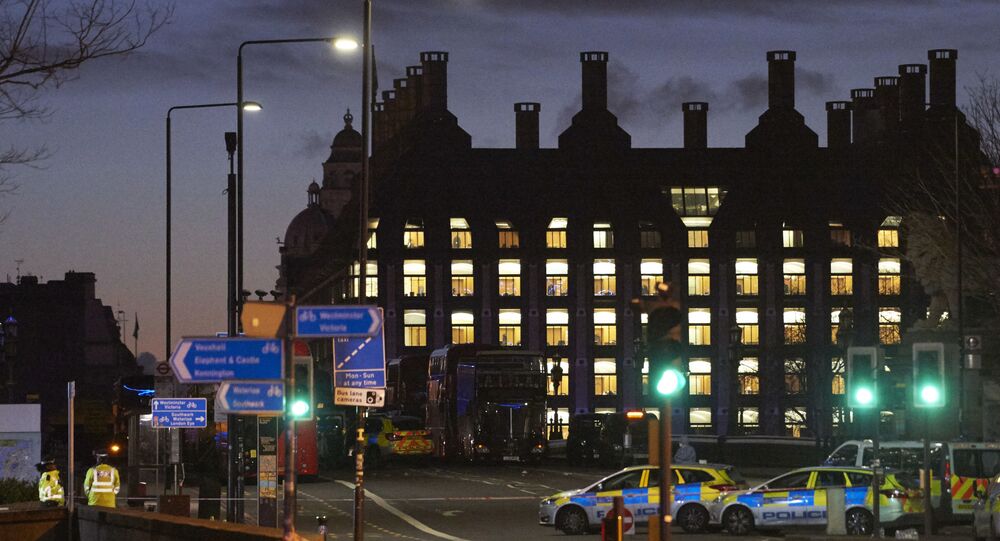 UK Prime Minister Theresa May said that one attacker is responsible for the deadly Westminster "terror incident" in London.

© AP Photo / Matt Dunham
At Least Five People, Including Police Officer, Dead in Westminster Terrorist Attack (VIDEO)
On Wednesday, 4 people were killed and many were injured after a vehicle drove into a crowd on London’s Westminster Bridge near the UK Parliament building. One man was later shot by police after he stabbed an officer inside the Parliament compound.

The UK prime minister said that a British-born man inspired by Islamist ideology, who had been previously investigated by MI-5 is responsible for the attack.

"The man was British born and… some years ago he was once investigated by MI5 in relation to concerns about violent extremism," she told the parliament, adding: "He was not part of the current intelligence picture."

She added that the Westminster attack perpetrator "was a peripheral figure."

"Our working assumption is that the attacker was inspired by Islamist ideology."

According to May, there was no intelligence of the suspect's intentions before the London attack.

"It is still believed this attacker acted alone and police have no reason to believe there are imminent further attacks on the public."

Theresa May said that a total of 12 people, inluding 9 foreigners, are victims of the Westminster attack.

"A single attacker drove his vehicle at speed into innocent pedestrians crossing Westminster Bridge, killing two people and injuring around 40 more. In addition to 12 Britons admitted to hospital, we know the victims include three French children, two Romanians, four South Koreans, one German, one Pole, one Irish, one Chinese, one Italian, one American and two Greeks," May told the parliament.

She praised the slain policeman as a hero.

The British prime minister said that the UK terror level is "severe" as there is no information of a specific threat. May said she will have more security meetings after the London attack.

© REUTERS / Stefan Wermuth
Car Used in Westminster Bridge Attack Registered in Essex
"I can confirm police have searched six addresses and made eight arrests in Birmingham and London," May told the parliament.

She said that it is "an attack on people everywhere." The UK prime minister said that terrorists will be defeated. May refered to the Westminster attack as an act trying to silence democracy, adding that "we are not afraid."

"Over the next five years we will invest an extra 2.5 billion [pounds, $3.1 billion] in building our global security and intelligence network, employing over 1,900 additional staff at MI5, MI6 and GCHQ and more than doubling our global network of counterterrorism experts working with priority countries across Europe, the Middle East, Africa and Asia."

"[I] will have further meetings with security officials today. The threat level to the UK has been set at severe, meaning attack is highly likely for same time. This is the second highest threat level. The highest level, critical, means there is specific intelligence that an attack is imminent. As a result of no such intelligence the independent joint terrorism analysis center has decided that the threat level will not change in the light of yesterday’s attack."

"This was an attack on free people everywhere and on behalf of the British people I would like to thank our friends and allies around the world who have made it clear they stand with us," May said.