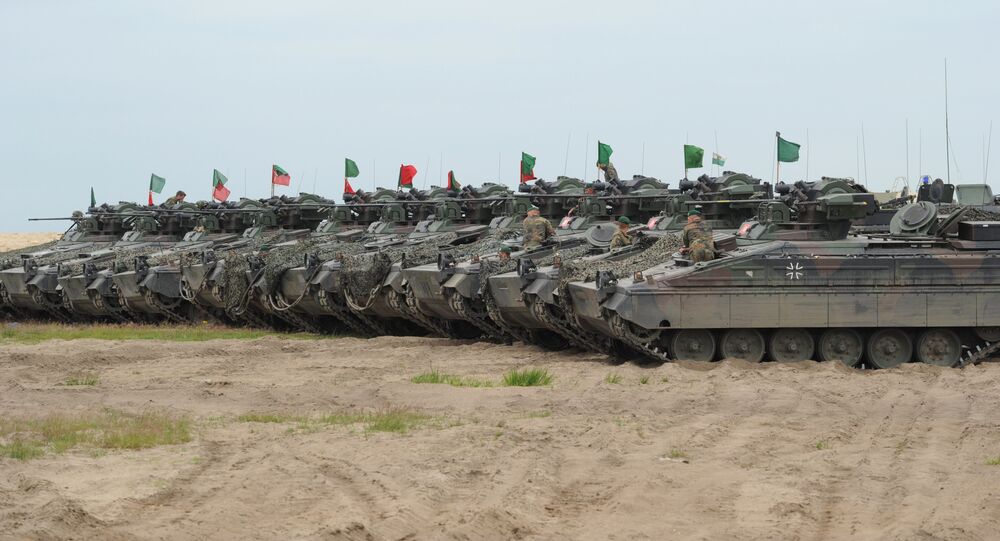 The Bundeswehr is leading a 1,000-strong troop battalion that was deployed to Lithuania earlier this month as part of NATO's Atlantic Resolve mission. On Friday, dozens of additional German military vehicles were placed in the Baltic country and are expected to be stationed one hundred kilometers from the Russian-Lithuanian border.

© REUTERS / Ints Kalnins
Closer to Russia? First NATO Enhanced Presence Troops to Arrive in Lithuania on February 7
The move has been called by several German media outlets a mission to "intimidate" Russia. According to German Der Stern magazine, in this way, NATO wants to strengthen its eastern flank and deter alleged Russian aggression. The mission is called eFP which is the abbreviation for Enhanced Forward Presence.

"Today we expect the arrival of the fourth and the last train carrying around 20 Marder infantry combat vehicles, bridge parts and a special tank. By this, the deployment of German forces is completed and we can begin the training next week," German military Torsten Stephan was quoted as saying last week.

The military activities of German forces near Russian borders were also covered by Austrian media sources.

"On Friday, there was a historic movement of troops: for the first time since the end of World War II German tanks have been brought to the Russian border," Austrian website oe24.at wrote.

At the same time, columnist of the German Der Spiegel magazine Jacob Augstein believes that NATO's attempts to intimidate Russia are reminiscent of the logic of the Cold War.

"Is the whole insanity of the Cold War back again? Will we soon experience the thinking in categories of Mutual Assured Destruction?" the journalist asked.

© AP Photo / Mindaugas Kulbis
NATO to Spend $6.1Mln to Build Infrastructure for Its Battalion in Lithuania
Since 2014, after Crimea rejoined Russia, NATO has been increasing its military presence in Eastern Europe, using the countries' vulnerability to alleged Russian aggression as a pretext. Moscow has repeatedly criticized the increased presence of the alliance's troops and military facilities close to Russia's borders.

Earlier, Russian Defense Minister Sergei Shoigu said that Russia is still ready for dialogue with the North Atlantic Treaty Organization (NATO) on issues including counterterrorism despite the alliance's provocative actions.

Germany Will Deploy Troops in Lithuania to 'Contain' Russia