Sweden recently unleashed a full-blown mockery campaign against US President Donald Trump over his bitter remarks about Sweden's ham-handed immigration policy. Apparently, Trump still got the last laugh, as the Nordic country was engulfed in violent street riots that broke out in a migrant-heavy district of Stockholm. 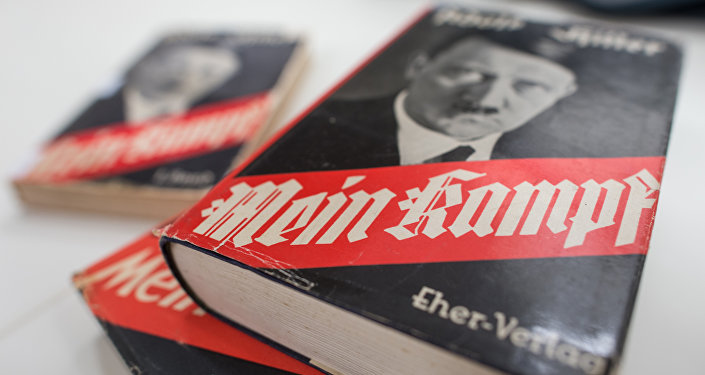 © AP Photo / Matthias Balk
PC Censorship? Swedish Library Outlaws Factual Book on Migration, Offers Hitler's Mein Kampf
Many Swedes believe Donald Trump fell flat on his face as he notoriously claimed Sweden faced major problems as a result of its exceedingly lenient immigrant policy. Shortly after a mass ridicule campaign by Swedish politicians, the mainstream media and web users, riots broke out in Rinkeby, which is colloquially known as "little Mogadishu" due to the fact that the majority of its population are of immigrant descent.

The following day, after Swedish Prime Minister Stefan Löfven notoriously dismissed Trump's scathing remarks, arguing Sweden was doing well in terms of equality and human development, looting, violence and arsons broke out in Rinkeby. Police officers were pelted with rocks and had to open fire to quell the violence. Swedish national broadcaster SVT admitted that the shots were directed at the rioters. So far, zero arrests have been made following the disturbances, prompting accusations of incapacity from angry locals, Dagens Nyheter reported.

"All of a sudden, a bunch of people showed up and start throwing stones at the officers. The officers felt cornered and fired warning shots," Stockholm police spokesman Lars Byström told news outlet Fria Tider.

© Photo : Twitter/realDonaldTrump
Trump Emerges Unscathed From 'Brawl' With Swedish Feminists
Incidentally, a photographer from the major Swedish daily Dagens Nyheter was assaulted in the riots. The publication had invested a lot of effort in refuting alleged errors in an unflattering documentary about Sweden released by Ami Horowitz of Fox News that had allegedly been referenced by Trump. The man was hospitalized after being beaten by more than a dozen rioters and robbed of his camera, Dagens Nyheter reported.

Earlier, Rinkeby, one of Sweden's numerous blighted areas, rife with crime and violence, became the scene of similar riots in 2010 and 2013.

Lotta Edholm, the opposition Vice Mayor of the City of Stockholm, claimed that local businessmen had previously complained about smash-and-grab assaults, vandalism, theft, intimidation and blackmail, which should have obviously sent alarm signals to the authorities.

"We cannot watch young people being recruited by hardened organized crime members, becoming 'mules' in drug smuggling or performing other crimes in exchange for 'protection' or other benefits," Lotta Edholm wrote in her opinion piece for the Swedish tabloid newspaper Expressen.

Last week, Trump baffled the public with unclear claims that something "was happening last night" in in Sweden, which provoked a strong reaction from the Swedish authorities and unleashed a series of internet jokes and memes tagged #LastNightinSweden. Later, Trump insisted that he was referring to rising migrant crime in general and not to any particular incident.

Give the public a break — The FAKE NEWS media is trying to say that large scale immigration in Sweden is working out just beautifully. NOT!

Sweden? Terror attack? What has he been smoking? Questions abound. https://t.co/XWgw8Fz7tj

Just a piece of friendly advice: when you are in a hole, stop digging.

To whom it might concern: here is what is happening in Sweden. All in all a rather pleasant place. https://t.co/PsnSqxSda6

​Sweden has been at pains to improve the country's image abroad. Last week, Swedish Radio launched a series of programs in English, clearly aimed at an international audience. Coincidentally, the very first episode featured a policeman trying to dismiss the problem of so-called "no-go zones," claiming the very concept was entirely wrong, since police were needed there around the clock.