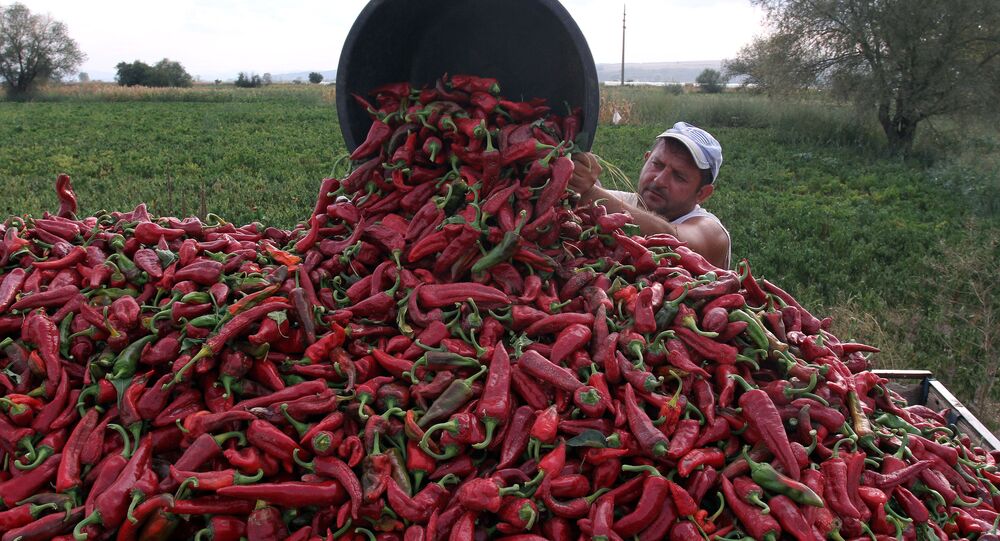 Genetically engineered food brings no benefit to Serbia, which shouldn't compromise on its GMO law to enter the WTO, Professor of Agriculture Miodrag Dimitrijevic told Sputnik.

© Photo : Гојко031
Serbian Presidential Candidate Aims to Kick-Start Economy With Russian Help
Earlier this month, Serbian Trade Minister Rasim Ljajic said that Serbia's entry to the World Trade Organization (WTO) is hampered by its laws against genetically modified organisms (GMO), which not only ban GMO cultivation in Serbia, but GMO food imports too.

"The WTO believes that no country should have an explicit ban on the trade of any product. When we meet this requirement, then we can talk about entry," Ljajic said, adding that he is not optimistic about Serbia's short-term prospects for WTO membership.

"In the short-term I'm not very optimistic because there is a lot of pressure and public resistance to change. After all, 163 countries are WTO members, Russia joined a few years ago, and 25 (countries) are in the process of joining. So, it's a great shame that we are not joining the WTO," he continued.

Miladin Sevarlic, a Professor of Agriculture at Belgrade University, told Sputnik Srbija that since 2013, every one of Serbia's 135 towns and municipalities have adopted the ban on GMO. Sevarlic disputes the claim made by GMO supporters that genetically modified food is the solution to feeding the world's growing population.

"The issue of hunger is solved by investment in agricultural production, and the world has enough resources without GMO to feed far more inhabitants than there are now on the planet. It is important to know that GMO is not about selection methods, that is the intersection of two related plants of the same species, but the intersection of animal genes or bacteria genes with plant genes. These are completely atypical types and there can be no talk about any kind of natural harmony."

Sevarlic identified three ways in which he believed the GMO industry was exploitative.

"Agricultural producers are being exploited through the sale of GMO seeds, the price of which is increasing much more than the price of conventional seeds. There is also the related sale of herbicide based on the carcinogenic glyphosate, which has a very harmful effect on plants, animals, soil, and the whole ecosystem. Finally, the use of GM food is harmful for consumers," Sevarlic said.

© AP Photo / Fabrice Coffrini
Kiev May Withdraw WTO Complaint Against Russia If Moscow Lifts Transit Sanctions
Geneticist Miodrag Dimitrijevic, Professor of Agriculture at the University of Novi Sad, told Sputnik that there is a political dimension to the pressure on Serbia to accept genetically modified food.

"GMO is a paradigm of the global organization of society, because food production is taken out of the national framework and enters the domain of activity of a small number of multinational companies. Whoever is independent in their food production is also politically independent. This is an important aspect of personal and national freedom and the freedom of people, because in this way a dozen multinational companies control the world so that they are the only ones producing seeds."

Dimitrijevic maintains that Serbia can meet its agricultural needs without GMO food, which brings more problems than it solves.

"GMO in agriculture does not solve anything for us, it only opens up new problems. We need to talk about many other issues in agriculture, (for example) cooperatives, the strengthening of small producers, not dealing with GMO food. Genetically modified organisms can pay off for Argentina, Brazil and the United States, which produce on large [tracts of farmland]. Farms in Serbia are small, averaging about four hectares, and here it is completely unprofitable. Why should we destroy our own production of traditional seeds, which are globally recognized, so that we can use someone else's dubious product?" Dimitrijevic concluded.

Russia, which joined the WTO in 2012, banned the cultivation of GMO food in July 2016, except for scientific research. Importers of GMO products must comply with a strict registration procedure.

​​Under EU law, individual countries are allowed to restrict or ban the cultivation of GM crops within their borders. Countries including Italy, Austria, France, Germany, Greece, Hungary and Luxembourg have banned the introduction of GMO crops.