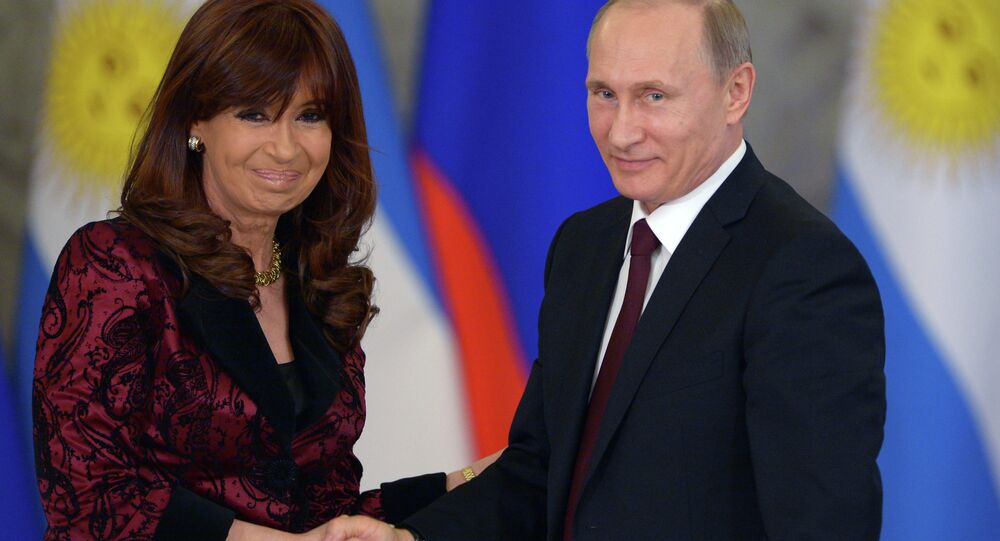 Russia and Argentina signed a number of deals on developing hydroelectric, nuclear and fossil-based energy and announced intentions to use each other's currencies in trade.

The memorandums are a massive breakthrough for economic relations between Russia and Argentina. Russian President Putin called the negotiations rich and fruitful.

"There were important long-term deals made in economic and political spheres. Russia and Argentina are entering a new stage of cooperation," the head of Argentina's Foreign Ministry Timerman Hector told Sputnik.

A $2 billion memorandum was signed to build a new hydroelectric dam and will consider switching to national currencies for mutual deals. Russia's VEB bank will provide $1.2 billion of the total investments needed, 35 percent of which will be used to pay Argentine subcontractors.

In addition, Russia will provide Argentina with access to Russian nuclear power technology. The deal will be prepared by the end of the year. The head of Russian nuclear power plant company Rosatom declined to give an estimate to the deals, saying that one bloc costs "billions of dollars."

"Rosatom has joined the project to build the sixth bloc of the Atucha nuclear power plant," Putin said.

Russian energy giant Gazprom signed a memorandum to explore and develop gas fields with Argentine state gas company YPF. The deal may amount to $1 billion in investments according to Argentina's Minister of Industry.

Russian company Uralmash will also construct a plant which will manufacture oil extraction equipment, which will amount to an additional $1.9 billion in Russian investments.

"Cristina Fernandez de Kirchner was greeted very warmly in Russia. Vladimir Putin was welcomed in Argentina the same way. This is another confirmation of the high level of mutual understanding between our countries," a commentator on Argentina's state television, Tico Rodriguez Paz, told Sputnik.

We appreciate the warm welcome not only from the government but from all the people of Russia. @KremlinRussia pic.twitter.com/AxIayYdh6N

Putin also said that Russia and Argentina will cooperate in the military-technical sphere and pledged to accelerate the construction of GLONASS satellite navigation systems in Argentina.

In the mutual statement, Kirchner and Putin agreed that the situation in Ukraine can only be solved by peaceful means. Putin added that Russia supports Argentina in the Malvinas (Falkland) Islands dispute.