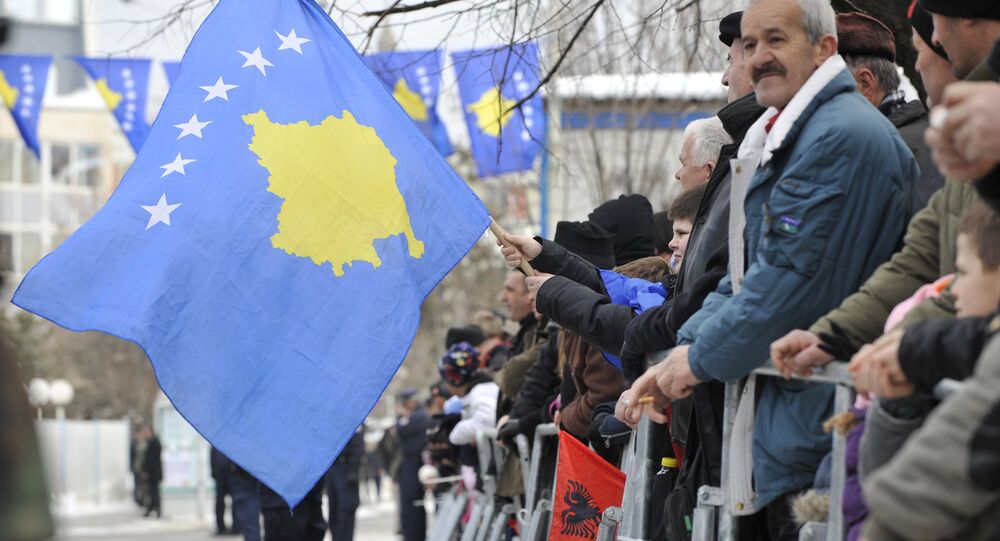 The Western-sponsored project of Kosovo has failed to build its own sovereignty and national identity. According to journalist and publicist Zivojin Rakovevic, Kosovo was never an autonomous state and now its dependence is unprecedented.

© AFP 2021 / Armend Nimani
Full Circle: Kosovo Army a 'Threat to All Serbians'
On February 17, Kosovo celebrated the ninth anniversary of its declaration of independence. On February 17, 2008, Kosovo’s parliament unilaterally declared the region to be independent from Serbia. The Republic of Kosovo has since been recognized by over 110 UN member states. Serbia and Russia do not recognize Kosovo’s independence.

Nine years on, the question of the viability of the Western-brokered project of an independent Kosovo is especially acute. Zivojin Rakovevic, a journalist and publicist from Kosovo and Metohija, said that the entire project is a failure.

"Kosovo is like an ill person who has no chance to survive, but its existence can be prolonged with some measures. There are no jobs and no future for the youth. Local strongmen dispose of people’s lives. They are trying to build a new national identity on their ideology. But Kosovo was never more dependent than today," Rakovevic told Sputnik Serbia.

The journalist underscored that as a sovereign national entity Kosovo lacks a historic and cultural basis.

"This is why by joining UNESCO the Republic of Kosovo wants to appropriate artifacts from the Serbian cultural legacy. They want to erase the fact that the Serbian national identity presented for centuries in this region," he pointed out.

© Flickr / Antti T. Nissinen
Tillerson Says US Will Work With Kosovo for 'Peace and Prosperity'
Despite significant international recognition, the Republic of Kosovo is a not a member of major international institutions, including the United Nations, the Council of Europe and the European Parliament. Kosovo’s independence is not recognized by five EU country members, the BRICS countries and the CIS members.

Rakovevic also pointed to the failure of the multiculturalism policy in Kosovo. Recently, graffiti reading "Kill the Serbs" was painted on a fast food kiosk in the town of Gnjilane. The town is notorious for the Gnjilane massacre, the killing of 80 Serb civilians by a paramilitary group of the Kosovo Liberation Army (KLA) during the 1998-1999 Kosovo War. Before the war there were 8,000 Serb residents in Gnjilane, now there are only 20.

© Flickr / Antti T. Nissinen
Serbia-Kosovo Dialogue Not to Succeed as Sides Use Talks for Own Political Gains
Among the Kosovo leadership, there are a lot of those suspected of being involved into war crimes during the Kosovo War, including President Hashim Thaci, the former KLA political leader.

The KLA was formed during the mid-1990s by Kosovo Albanians seeking independence from Serbia and the creation of a mono-ethnic state.

There have been numerous reports of abuses and war crimes committed by KLA members during the war, including massacres of civilians, prisons camps, allegations of organ theft etc. A special court in The Hague has been established to investigate those crimes. Moreover, according to numerous reports, many KLA veterans are now fighting in the ranks of Daesh in Syria and Iraq.

At the same time, Kosovo remains one of the most expensive political projects by the West. According to different sources, between 2000 and 2010, the region received up to $40 billion.