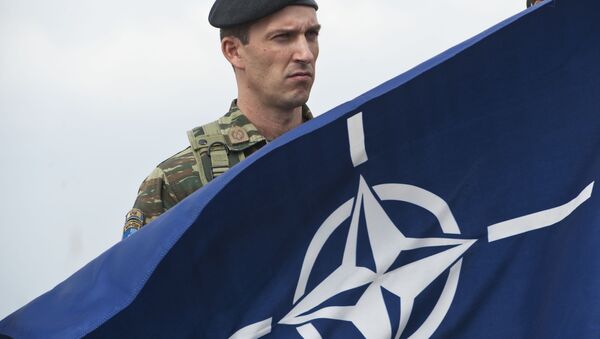 The parliament of the self-proclaimed Kosovo Republic has adopted a draft resolution to transform the Kosovo Security Forces into Kosovo Armed Forces. In an interview with Sputnik, Dusan Celic, a professor of law in Pristina, warned about the danger this could pose to the Serb minority in Kosovo and Serbia in general.

Full-Fledged Kosovo Army Now Just a Step Away
“A parliamentary resolution has no binding force anywhere in the world. It is just a political intention to establish an armed force," Dusan Celic told Sputnik Serbia.

He added that UN Security Council Resolution 1244 stipulates that NATO (KFOR) peacekeepers and Serbian army and police are the only military forces allowed in the province.

“The UN resolution also provides for the return of a certain number of Serbian military and police, which is something people tend to forget.”

Professor Celic said that Belgrade has the sole authority to raise the issue of Kosovo armed forces at the UN Security Council, adding that a Kosovo army would pose a “threat to all Serbians.”

When asked why Kosovo needs an army, Celic cited the US ambassador in Pristina as saying that KFOR will not leave Kosovo as long as the republic is unable to defend itself.

In an interview with Sputnik, Kosovo Azem Vllasi, a political adviser at the Kosovo Foreign Ministry, said that Kosovo is an independent state and KFOR will not stay forever.

“We’ve been getting signals from NATO to establish our own military structure. That’s why we raised the issue at the parliament. This will take time, of course, but we, just like any other country, are all set to build an armed force,” Vllasi said.

He added that this will be done even if no Serbian MPs support the idea to create the Kosovo armed forces.

“We could strengthen the existing Kosovo Security Force turning them into a formidable defense force, no matter how we call it. This means that we won’t necessarily have to change the constitution,” he continued.

What's the Price of 'Falling in Love' With 'Independent Kosovo'?
If the Kosovo army is eventually created, it would not only get modern weapons but also the KFOR bases now being used by the Kosovo Security Forces.

Besides, when they take over the British contingent of the KFOR in Podujevo, they would be able to control the northeastern stretch of the region’s administrative border with central Serbia.

Units deployed in Kacanik would be able to control, together with US troops stationed at Camp Bondsteel, the main base of the US Army in Kosovo, the eastern leg of the administrative border, while those deployed at Prizren and Pec would control Kosovo’s border with neighboring Albania and Montenegro.