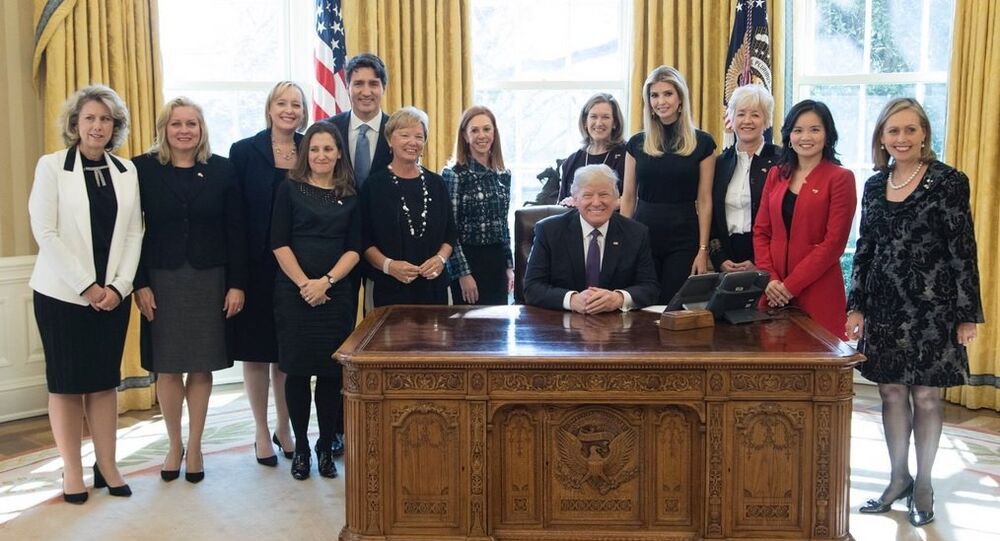 Earlier in February, Swedish Environment Minister Isabella Lövin taunted US President Donald Trump by posting a picture of herself surrounded by only women. "We are a feminist government, which is clearly visible in this picture," she said in a written comment to Swedish national broadcaster SVT. Trump did not leave it unanswered.

© AFP 2020 / JIM WATSON
Feminist Sweden on Warpath With Trump Over Climate, Women
Trump's repartee in the online skirmish featured yet another image. On Monday, Trump, who is habitually labeled as "misogynist," "racist" and "patriarchal" by Swedish critics, launched a new "women's initiative," whose aim is to get more women in key positions.

© AP Photo / Ebrahim Noroozi
Feminist Sweden Puts on Hijab in Hope of Doing More Business With Iran
Sweden's current red-green leadership prides itself in being the world's first 'overtly feminist' government, yet was recently drowned in bitter criticism for hypocrisy for its failure to make a grand stand for women-kind during its fence-mending trip to Iran. During the past weekend's business trip to Tehran, all eleven women in the high-ranking Swedish delegation topped by Prime Minister Stefan Löfven notoriously sported Islamic headdress and kept an "appropriate" distance from men in order to comply with Iranian law, which was called "a walk of shame" by non-governmental human rights NGO by UN Watch.