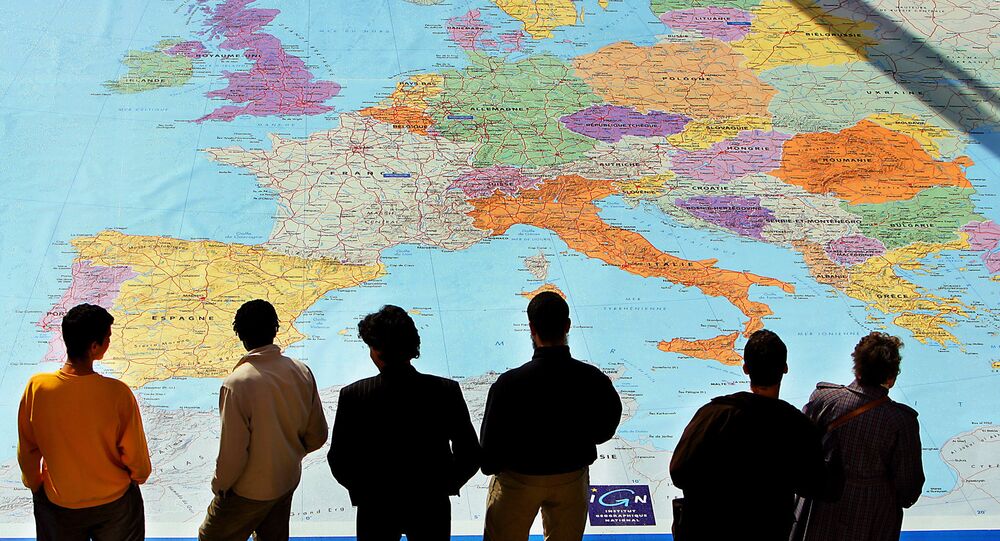 With the serious economic and political crisis showing no signs of abating in Europe, both geographical and moral boundaries are being erased in the name of globalization, Sputnik Italy quoted participants of a round table discussion in Rome as saying.

© Sputnik / Alexey Vitvitsky
'Existential Crisis' in Europe to Result in 'Other Countries Leaving EU'
Now that Europe is going through a severe economic and political crisis, its geographical and moral barriers are being erased for the sake of globalization, the participants of a round table discussion in Rome were quoted by Sputnik Italy as saying.

They claimed that Europe have already entered an era of uncertainty where cultural differences had blurred.

Italian journalist Marcello Veneziani, for his part, noted that the process of erasing all boundaries across Europe had come amid stark differences between the EU member states in terms of economic vitality and political sovereignty.

In this regard, Veneziani underscored the importance of boundaries being preserved.

"Without boundaries-related restrictions, any society can increase to immeasurable dimensions," he said, calling for the creation of a governing class who would be able to not only win elections, but also to manage the affairs of state.

In an interview with Sputnik Italy, Italian economics expert Alberto Bagnai, in turn, focused on the economic crisis in Europe and how it had spelled disaster for Italy, which had earlier been hit by the 2008 economic meltdown.

© Photo : Pixabay
Democracy in Crisis: Rising Inequality Could Cause Globalization Rollback
Bagnai specifically critiqued the court of popular opinion, where anyone who would champion his or her country's national interests, identity or ability to control its borders is denounced as a populist.

"This is happening because we live in a historical period when only multinational companies possess sovereignty. It's clear that the media's dismissive reaction to the idea that people can also possess sovereignty and identities is playing into someone's hands," he said.

Additionally, Bagnai commented on the fact that there are 90 NATO and US thermonuclear bombs on Italian soil, something that he said calls into question whether Italy is, in fact, a sovereign country.

"Italy possessing sovereignty is out of the question, and the problem is that it is time to understand that we should take advantage of the situation to negotiate the best terms for our country now, [and address] the relationship between the boss and his local representative, Germany," he said.

Bagnai added that "Rome is very unlikely to become the capital of the Empire again in the coming years."

"Given that we are a dependent country, we can either move towards a European Union which has, in fact, become the Fourth Reich which is opposed by the United States, or we can gain a little autonomy, negotiating with Russia and Washington," he said.

"In this vein, mutual rapprochement is not necessarily a negative thing. It is much better than dropping atomic bombs on each other," he concluded.

"The EU crisis is much deeper, as many EU members have huge debts and high unemployment rates; the economies of some EU countries are very weak. Therefore, we should focus on economics, strengthening the EU economy through reasonable tax cuts and reducing bureaucracy," Hofer said.

European Union 'Living Through the Worst Crisis Since the Cold War'