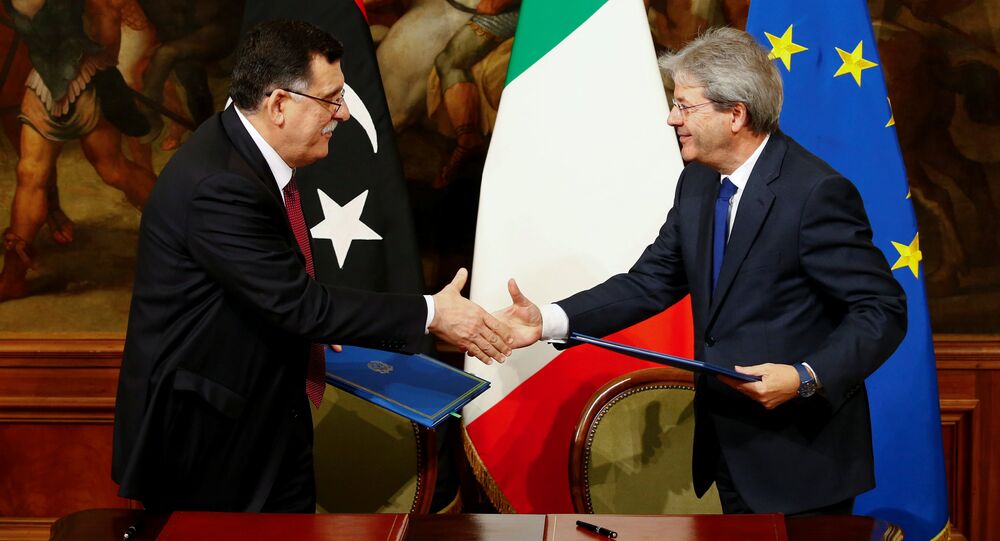 The EU has its sights set on Libya in its latest plant to stem the flow of migrants onto European soil with Italy agreeing a deal with the UN-backed government based in Tripoli, to "tackle the issue closer to its source," expert in international relations and security told Sputnik.

Under the plans, the EU will give money to the Libyan government to help it intercept smuggler's boats close to the north African coastline and stop them progressing any further. EU leaders have also agreed to pay the Libyan government 200 million euros to set up refugee camps and boost its coast guard facilities.

A deal signed by Italian Prime Minister Paolo Getiloni and Libya's Fayez al-Sarraj on stemming migration from across the Mediterranean Sea to Europe is also backed by EU leaders, confirming their support for the UN-backed government, run by al-Sarraj. Italy has also been funding refugee camps in Libya, with the EU stumping up an extra 200 million euros to keep migrants in North Africa.

During a meeting of senior officials in Malta, EU High Representative for Foreign Affairs and Security Policy, Federica Mogherini, said that migration could "only be managed effectively through cooperation and partnership."

"Our presence here is a political statement. With this gathering we are reaffirming that migration can only be managed effectively through cooperation and partnership," Mogherini said.

The decision to adopt such a "hard" security approach regarding the migration crisis is evidence that the EU is "trying to tackle the issue closer to its source," Dr. Vassilis Kappis, an expert in security and international relations at the University of Buckingham told Sputnik, adding that "members of the Libyan coast guard begun their training in the specialized maritime training NATO base in Souda Bay, Crete,"

"Overall, central Mediterranean routes, such as the Libyan route, have been mostly used when the Turkish route is closed. This is because the financial cost of maritime routes towards Italy is high for smugglers and migrants, reflecting the heightened danger for interception and the need for relatively large vessels," Dr. Kappis told Sputnik.

Since the closure of the Turkish route across the Aegean Sea, once favored by people smugglers and refugees, alternative routes have been sought by migrants and traffickers who have subsequently returned to crossing the Mediterranean by boat, between Libya and Italy.

"Even if the EU is successful in monitoring the Libyan shores, it really comes down to the long-term outlook of the Turkey-Aegean Sea route. For the time being, the Turkish government is more or less safeguarding the 'gates,' but for various reasons I see this as being unsustainable," Dr. Kappis said.

Meanwhile Dr. Kappis believes that "a NATO-EU maritime permanent presence in the Aegean Sea would be a decisive step towards sealing the borders of the continent, though this is unlikely to occur, due to Turkish objections."

As the EU's latest deal with Libya received approval from the European community, hundreds of migrants had to be rescued at sea near the Libyan coastline. NGOs and humanitarian groups continue to condemn the plan, suggesting it leaves people open to further exploitation in a country already ravaged with risks.

We will strongly resist #EU agreement to block #refugees & migrants in Libya, which we know will lead to horrendous suffering. #MaltaSummit pic.twitter.com/Md0JZw2gEw