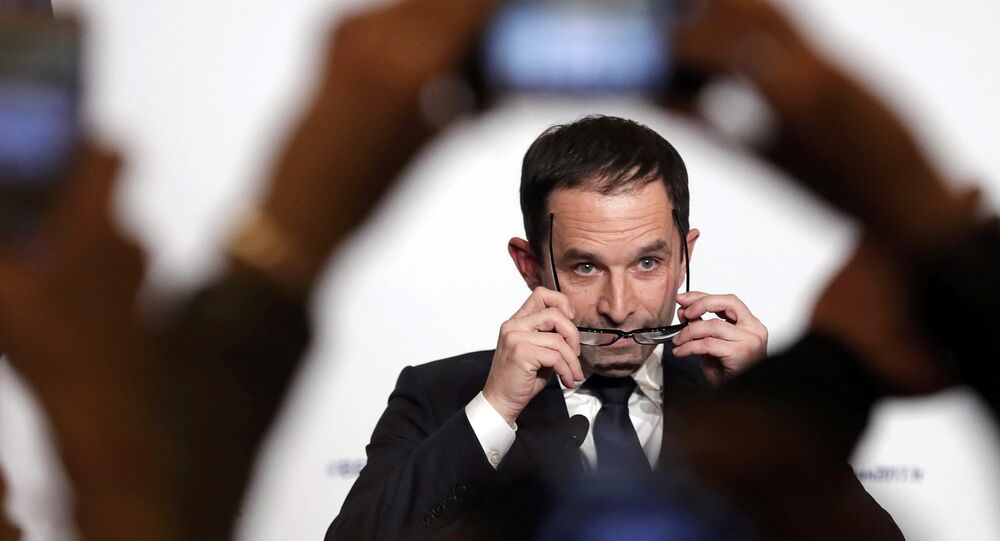 The victory of left-winger Benoit Hamon in the French Socialist Party primaries could drive moderate left-wing voters "into the arms" of centrist candidate Emmanuel Macron ahead of France's presidential election, an expert in French politics has told Sputnik.

His victory represents a sharp change in direction from the pro-business agenda of current Socialist President Francois Hollande, who announced he would not contest the upcoming election.

​Amid a divided Socialist party, split between left-wing supporters of Hamon and proponents of Valls' more centrist, pro-business agenda, Hamon called on the French left, including the Green Party and independent left-wing presidential candidate Jean-Luc Melenchon, to unite behind him ahead of the April and May elections.

"I will propose to them that we build a coherent and durable government majority," Hamon said.

However Dr. Paul Smith, associate professor in French and Francophone Studies at the University of Nottingham, told Sputnik that he didn't believe Melenchon would stand down.

"It's not so much a left-right divide, but a left-left divide… One of the problems — not for Hamon, but for one of his rivals, Melenchon — is that Melenchon and Hamon look very alike in many of their policies and what this decision does is that it doesn't really put a candidate between Melenchon and Macron."

​Instead of uniting the left, Dr. Smith said Hamon's victory in the Socialist primaries was likely to provide a boost to the chances of independent centrist Emmanuel Macron, who is currently third in opinion polls behind Les Republicains' Francois Fillon and Marine Le Pen of the far-right Front National.

"What we've seen happening is in fact a number of Socialist deputies have already announced that they feel unable to support Hamon, and they've decided that they're going to support Macron," Dr. Smith told Sputnik.

​"There's kind of a question mark about Melenchon versus Hamon, and also a very clear demarcation whereby the right of the Socialist Party are talking about, or have announced that they're actually going to support Macron."

And Dr. Smith says given that Macron is gaining on both the center-right and far-right candidates in polling, the defection of moderate Socialist figures to his campaign could also influence the voting preferences of the general public.

​"I'm talking about those on the right of the Socialist Party… They might be feeling that this decision that has been taken in the [Socialist] primary is going to push the moderate left-wing electorate into the arms of Macron even more firmly."

With Hamon's victory set to boost Macron's campaign, the centrist's main rivals on the right of French politics have also recently suffered blows.

Fillon, the center-right Les Republicains candidate and favorite to become president in May, has been the subject of an investigation over allegations that his wife, Penelope, was paid US$534,000 (€500,000) in state funds for fake work.

France: Presidential election 2017 so far: #LePen, #Macron and #Fillon are fighting for the first place in first round. #Hamon on the rise. pic.twitter.com/DXBxiDZDR3

​Fillon has rejected the allegations, however Dr. Smith noted the scandal "has done him a great deal of harm."

Fillon's woes have come as Marine Le Pen's far-right Front National were being investigated over the way the party paid for its aides in the European Parliament, with accusations of "organized fraud" and "concealed work," according to French media.

Le Pen currently leads the polls narrowly over Fillon, with Macron closing the gap in third, however pollsters believe the Les Republicains candidate would beat the Front National Leader should he reach the second round run-off.